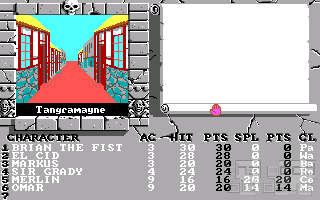 If you enjoyed the first game, Tales of the Unknown: The Bard's Tale, you'll enjoy this one as well. The play style is almost completely identical. The artwork, though limited to 16 colors, was well done in my opinion. The music was much better on the alternate systems (Amiga, Commodore 64, Apple IIgs, etc...) but they did the best they could with the PC's speaker.

Combat now has a range component, you must either advance or use ranged attacks. This can be quite frustrating as you are given the choice to either fight or advance. Advancing can get your power hitting melee weapons up to where they can do some good, but prevents you from actually doing anything else (such as using a powerful ranged attack.) The list of enemies now includes those with ranged attacks of their own, so just sitting still and waiting for the enemy is not always successful.

You now have a wilderness area, outside of the city. Not much really there though. There is a Sage that will give you clues to where you need to go next. Other than that, it's just a means of getting from one city to the next. Complete with random encounters.

Yes, there are now more cities to explore. Every city has the standard compliment of buildings. An adventurer's guild, a branch of Garth's equipment shop, several temples, lots of empty (or monster filled,) houses, and the obligatory dungeon or tower to explore. In total there are 8 cities.

Finally, there is a new class for your characters, the Archmage. The first game, mentions the Archmage, but only as an accomplishment. Like the first game, a mage that has achieved the 3rd tier of spells (7th level,) can change specialties (Sorcerer, Conjurer, Magician, & Wizard.) In the first game, the manual calls any character that has achieved all 7 tiers of spells in all 4 specialties an Archmage, but nothing changes in the game (other than that the character is very powerful.) Now, it as actual class available to a mage that has achieved 3rd tier in all 4 specialties. The Archmage only gets 2 spells at first tier, and one for each tier thereafter. However, these spells are exceptionally useful or powerful. A good class to strive for.

The basic mission in the game is to collect the 7 pieces of the Destiny Wand and reforge it to defeat the evil archmage Lagoth Zanta. From the numbers, it's fairly easy to deduce that each city (except the first,) will hold a piece of the wand. So basically, your mission is to travel to each city. Explore that city's dungeon (tower,) to the very bottom (top.) To find the Snare of Death, a special puzzle room that traps the adventurers until they either solve the puzzles or die in the attempt. Solving this snare, will grant the party a piece of the wand.

All in all, I found this even more enjoyable than the first game. The puzzles and story lines were well thought out. The beeps & boops of the PC speaker music began to grate on my nerves after a while, but is sort of needed to know when your Bard's music has stopped. I've also played through this game on the Commodore 64, and the play style is identical. The music on the C64 is much better than on the PC, of course, so it took longer for the music to get tiresome.

Mr Creosote:
For me, the weakest part of the original trilogy. Although it's bigger than the predecessor, it is also full of nasty surprises and plainly unfair scenes. The other two games are much better balanced.
Pheonix:
Feel free to share anything about The Bard's Tale II: Destiny Knight (1986) here!
[Reply] 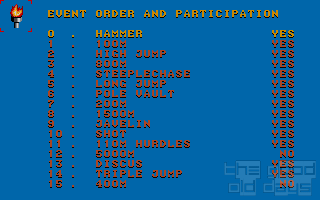