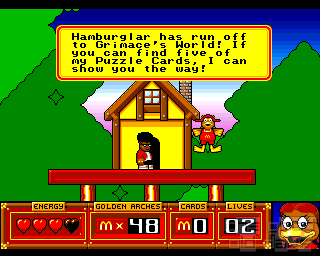 Don't know about the rest of the world, but here, Ronald McDonald and the accompanying cartoon characters have been pretty much retired as promotional mascots. Even in the early 1990s, they were already on the way out. Which is easy to say in retrospect, but at the time, some managers may have believed it to be the right time to release a promotional game set in McDonald Land.

Well, and what is it that happens in McDonald Land? The Hamburglar is up to no good and Ronald tasks two kids (regular customers judging by their weight) to retrieve an item for him. Which, for some reason, involves jumping and running through a set of levels not to actually find clues, but just to search for “cards” which will please the “good” McDonald characters so that they will then share an actual lead with you. You'd think it would be in their best interest to give these kids all the support, but no… you have to collect cards first! Assholes! 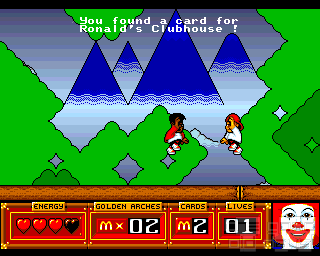 OK, plot certainly has never been one of the strong sides of the Jump'n'Run genre. The player (another player can join, although it's the usual alternation; you know what would be a cool experiment? Letting both play at the same time) explores a number of areas, each of which contains a number of levels. The levels themselves are fairly short and fairly empty. The construction nevertheless isn't half bad, though. Although most levels are very easy to get through, the actual secrets, like special bonuses and especially the essential cards, are hidden behind more tricky side passages.

Just that they wouldn't even be all that tricky if it weren't for the slightly too pronounced inertia making the controls a little difficult for tight jumps and the unexact collision detection inexplicably preventing you from picking weapons (to kill monster, you don't jump on their heads, but pick up blocks and throw them at them) up sometimes (though never preventing you from getting hit by monsters). Nothing really very bad, but not fine-tuned, either.

You see, it's those little things, like the ones mentioned or the fact that dead enemies reappear while weapons don't when you have to replay a section, which, along with the fairly dull settings and the very old-fashioned graphics for 1992 (this would have been alright in 1989!), just make you realise at some point not so far into the game that you'd rather play something else. McDonald Land is servicable, but there were much better games released in this genre at the time! This world would have needed a heavy dose of artificial flavour enhancers to become a real delicacy. 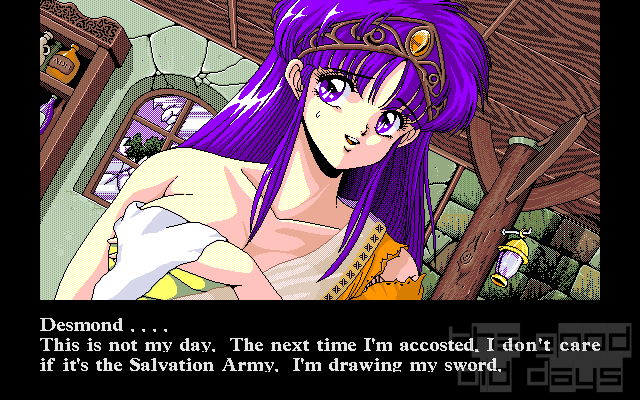