The Bard's Tale III: Thief of Fate
for PC (EGA) 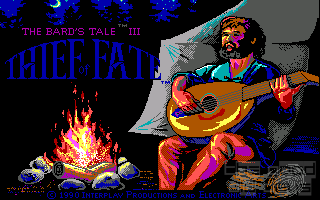 Bard's Tale III – Thief of Fate is the third and final chapter in the original Bard's Tale saga. Again, the play style remains the same but the world has been expanded. The music choices have been expanded to include AdLib or Roland MT-32 (the best IMHO.) If you are using DOSBox to play, you will need mount the necessary MT-32 ROM files to utilize the latter, or a real MT-32 with a compatible interface. Reading the Reference Card will tell you how to set for the non-default values (PC Speaker & EGA Graphics.)

You will now be exploring several worlds, for your world has fallen, Skara Brae has been destroyed. All that is left of the Review Board (who have granted you spells and levels,) is a single old and failing man. Travel forth, conquer time, and become the Thief of Fate

Sorry, the advertisement just sort of spilled out of me there. But it is basically your quest this time.

2 new classes have been added to the game this time. The Chronomancer, who has the special spells needed to travel from world to world, and time to time. I think the Chrono part of that title sort of gives it away. But in gaining those spells, they lose access to all other spells. Also, a Warrior class can now gain access to very powerful spells by becoming a Geomancer. Such a warrior retains a Fighters ability to wear the better armors and use the better weapons, but loses any special abilities of their specific class. Fighters lose thier multiple attacks, Bards lose their songs, Hunters lose their critical hits, and monks lose their AC bonus & multiple attacks.

Another new aspect, your bard can now carry around their own drink. Fill your wineskin with either wine or water, or whatever other spirit you prefer, and you no longer have to find an inn when your throat runs dry. But, beware, inns are now harder to find. As is Garth's Equipment Shop. There is an inn near the starting camp, but while on other worlds, you may not be able to find one.

In my honest opinion, the Bard's Tale series was a major accomplishment in game & story design for its time. Even today, the story elements are exceptional. I spent long hours into the night, and many days lost in the other worlds it provided. Waiting with high anticipation for the next saga to be released, and to arrive at my door. It was a sad day when the franchise was abandoned.

Pheonix:
Feel free to share anything about The Bard's Tale III: Thief of Fate (1988) here!
[Reply] 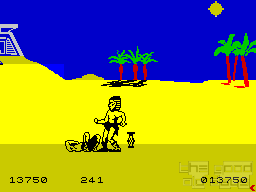