Ultima II: Revenge of the Enchantress
for PC (CGA) 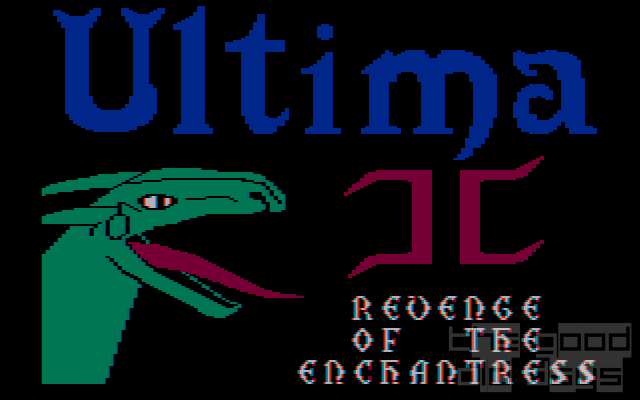 Ultima, later re-written and released as Ultima I: The First Age of Darkness, saw you, the hero from another world, conquering time itself to defeat the evil wizard Mondain. In what is actually Lord British's (a.k.a. Richard Garriott,) second game in the Ultima universe, The evil wizard Mondain had created a gem of imortality which prevented you from defeating him. Until you mastered time, and defeated him before he could finish crafting it.

This is important to understand, as in Ultima II, his apprentice (and lover,) Minax, uses time itself as a weapon against you. In Ultima II, you are summoned from another world to save Lord British's realm from an evil wizard. Only this time, the wizard has used the knowledge of time travel to go back to the dawn of time itself to conquer the world. This has opened up time gates that connect the different eras of the world. You, the hero, must find what you need to penetrate Minax's fortress and defeat her. Once again saving the realm from the clutches of an evil wizard.

While the world is supposed to be Sosaria (the land of Lord British,) it closely resembles a world we all know well. With cities ssuch as “New San Antonio” and what is obviously Moscow (complete with “Da Red Skware”). The world however, is broken up into 5 different time zones. From the far past, where the world is one large single land mass (surrounded by water,) to the far future, where only a single city remains.

Play style remains simular to Ultima I. That is, a top down view of yourself wondering the world. Again, the dungeons are 3D rendered mazes that you can explore (or not, if you so chose.) Just like the first game, you will need to conquer space, to find the vital clues and information you need. The cities are now each unique, and not carbon copies of each other (like the first game.) Though the conversation of the natives tends towords the repetitive. OK, all natives (that don't have something particular to impart,) have the same dialogue. Clerics all tell you to believe, and so forth.

The game also introduced utility items that the first game didn't have. Magical helms that allow you an overview of the entire land. Cloaks that protect you from the evil magic of the balrogs. Along with other specialty items. All of which must be discovered by defeating the evil denizens of the world. In theory, items dropped from logical sources. The Blue Tassels needed for a ships crew to recognize you as a captian, would drop from defeating pirate ships, for example. However, in reality the most useful items pretty much dropped only from thieves. With other creatues only occasionally dropping what you would expect them to. Which was quite a hassle, as thieves tended to steal important items from you while you are trying to defeat them.

The best graphics for the game, in my opinion, were on the Commodore 64 or Apple II versions of the game. Though a PC with a CGA card and a composite monitor also produced good graphics. If playing on a modern PC, it is strongly advised that you use the SVN build of DOSBox with it's ability to emulate CGA composite mode. The screen shots provided are all made with such an emulation, except for one to show the difference. It should be fairly easy to spot.

The PC version is also limited in sound effects to the PC speaker. On modern systems, running faster than the game was designed for, these sounds are pretty much eliminated. The C64's SID based audio was much better. Running the game in DOSBox, however, with cycles set low enough (I use cycles set to 500,) will allow you to hear the sounds close to how they were originally intended. If you install the upgrade patch, however, the game is pretty much unplayable at that speed. The choice is yours, use the upgrade for better graphics, or have the original sounds.

Overall, I found the game extremely enjoyable. At the time it was quite innovative. It was a rarity, and even today this is still true, in that it was a completely open world. You are given a basic mission, then dropped into the world and left to do whatever you want. If you want to just wander around exploring without advancing the quest, no problem. Or you can go straight to the heart of the issue from the very beginning. Though you will still need to get the proper information before you can complete certain steps.

Pheonix:
Feel free to share anything about Ultima II: Revenge of the Enchantress (1982) here!
[Reply] 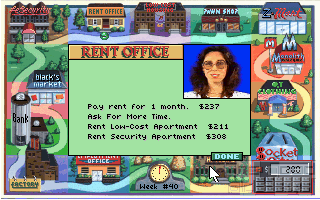