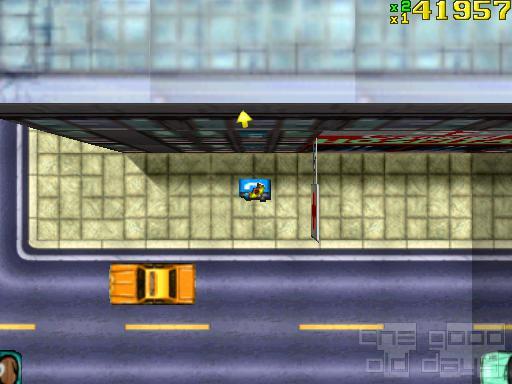 Developed by DMA Designs, the same people who made Lemmings, GTA is a sandbox game where you get rewarded for bad behavior and back in 1997, the concept of being the bad guy was new back and mostly unheard of.

You play from a top down perspective and from the starting point, you can go to the pointed payphone booth to get missions. Each mission rewards you and there's many of them including delivering vehicles you have stolen to a spot, though you could also just skip the missions and just go out and do whatever you want. (Though by doing missions, you also unlock more areas.)

You start off with no weapons and only your fists which are extremely weak but when you find crates, you can destroy them to get weapons and sometimes even powerups like extra lives and a powerup that makes you run super fast for a brief moment. As the title suggests, you can steal cars and every vehicle in the game is fair game. There's many to choose from including some motocycles, some of which can go ridiculously dangerously fast. Points are rewarded for completing missions, killing people and cops, destroying vehicles and much more. Some crates also give you Kill Frenzyss where you get a weapon to kill as many people as you can within a time limit which is pretty fun

The arrow keys turn your character around and make you go fowards and backwards while Control fires your weapon of choice and Enter allows you to get in a vehicle or steal one from someone and pressing spacebar while running at a vehicle allows you to jump over one. Space also peforms a hand break while driving a vehicle while Tab, when you're in a car, lets you honk your horn or burp when on foot. Z and X cycles your weapons. F5 will switch radio stations while you're driving.

From the opening song in the menu to the tiny sounds that play during gameplay, such as the sounds when you're walking on the street or the sounds of the people on the street and to the radio stations, the sound and music is made of epic win. This is perhaps one of the best sounding games ever released for DOS.

Although the gameplay is top down, the map is actually in 3D with buildings being in 3D. Out of the box, GTA supports 256 color graphics, hi-color graphics which is something you don't expect to see in a DOS game, and 3DFX Glide graphics which smoothens out the textures and sprites and makes the game look smooth and amazing. The sprites of the people and vehicles are pretty detailed. When you're driving a vehicle, the camera zooms out creating a larger view on screen which allows you to see alot more of the screen while driving and it looks impressive. The only thing missing though is gun flare effects when you fire from your gun. The only thing I don't like is that the camera only zooms out when you're actually moving in your vehicle and not while you're on it, so if you need to slow down, you will see less again and it can be a distraction.

Grand Theft Auto is a great start to the series and it's still very fun to play today. If you're curious to see how Grand Theft Auto started before they went big with GTA 3, then give this game a try. You won't be disappointed