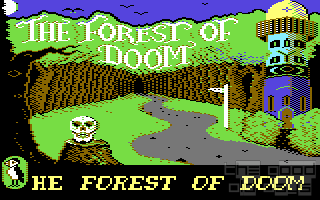 Here we are, finally at the end of the road. Really this time. This is the last computer conversion of a Fighting Fantasy book we're going to cover. For now. Until anyone decides otherwise. Because, you know, there is a quite tempting one from the late 90s…

Anyway, with The Forest of Doom, we actually return to the early beginnings of the series. It was the third book, and also the third computer game. I.e. in the overall picture, it belongs to the second stylistic batch of games. After the first, arcadey entry, we got two almost literal adaptions, of which this is one. Finally, the games transitioned into more traditional parser-driven text adventures. The first one still retained the randomized combat which was subsequently dropped as well.

Each approach had its merits, but also its very own set of issues which I believe have been identified fairly well in our coverage. So now the ball is on your side again. Which of these games have you played? What's the "right" way to attempt such adaptions? For sure, we'd be interested in your feedback.