Please consider posting in the forum unless you have a very good reason to contact me privately. Seriously, 95% of the mails I'm getting aren't about private matters at all! If you really need to talk to me directly, here's the ways you can do it (in the order of precedence):
- Forum messenger
- Jabber: MrCreosote@jabber.ccc.de

The first few years of my life, I involuntarily spent without any computers. That makes them pretty uninteresting and irrelevant (at least for this article...). In the mid-80s, my computer career started with a Commodore Plus/4. With only had six or seven games for it, there wasn't much to choose from, but those few were played extensively - and it was fun! The computer belonged to our grandparents, though, and so it wasn't always available. Roughly at the same time, I also fiddled around with various C64 which belonged to friends from school

In 1990 was the year of the first 'own' computer - an Amiga 500. Of course 'trading' copies with other Amiga users started immediately, anda nice collection of games was quickly built up. From today's point of view, it was still tiny, but for the pre-Internet days, the standards were different, of course.

The following few years pretty much set my taste of games into stone for good. These days, I'm playing the same games I did then. Not because I'm too cheap to buy something new, but because that's what I like. Graphics from that time are stylish pieces of art to me. Gameplay had an all time high in the late 80s and the early 90s. And so that's what I'm stuck with.

In mid-1999, I first got to the Internet (one year after getting my first IBM PC). Searching for the newest version of UAE (Amiga emulator), I came across a site called "Abandonware Works" by some guy called Gary Whaley (it's long gone now, so don't bother looking for it). It had a few 'old' PC and Amiga games for download, and it was a member of the active Abandonware rings of that time: TUOL and AR. Following the domino effect, I found more and more of these sites...

Apart from a few forum posting, it wasn't until December 1999 that I decided to become active. I had never made any website before, so I just took Netscape Composer (version 4.x), a few standard gifs I found on the net and CDs, threw them together the best I could, and that was the first version of The Good Old Days.

The site opened its doors to the public on February 26th, 2000. The reasons it took me so long from the plan to actually getting it ready were numerous. First of all, even with a 'WYSIWYG' editor, designing pages took a long time. Webhosts and how to deal with them (signing up, uploading) freaked me out. Last but not least, there are two more reasons: Initially, I planned to make the site completely legal, i.e. get permissions from the copyright holders to distribute their old games. So I sent out e-mails to them... and hardly received any replies at all. Yes, it was probably naive. The absolutely last reason I'm going to mention here was that I wanted to make the site 'quality over quantity' from the start. All games had relatively detailed reviews even then. The rest is history...

My favourite games are Adventures. Point &amp;amp;amp;amp; click is perfect, but I don't mind a good piece of Interactive Fiction at all. However, as with all genres, the execution of the game has to be good. Fun killers in Adventures would for example be enless deathtraps and dead ends, or also useless labyrinths. Strategy comes next in my toplist. Usually round based - hectic and strategy only rarely mix. That does not include so-called 'RTS' which I don't consider strategy. These are the two genres you'll find most of my reviews in. Of course, I won't turn down a nice quick action or sports game. The genres in which you'll only rarely find my name are Simulations (I simply don't like these 'realistic' sims), Puzzle (some highlights are ok, but the normal stuff.... yawn) and RPG (I just can't stand stereotype fantasy, and all this endless bickering about 'stats'... urgh).

Other sites I used to run include the subsites of the Abandonware Network. My computer collection consists of a three PCs (out of which only the 486 is used for gaming), an Amiga 1200, an Amiga 500 and a C64. I don't own any 'consoles'. Not because I have anything against them in general, but they didn't play any mentionable part in my 'socialization', and they're also not very interesting hardware-wise (in contrast to 'computers').

Finally, here's a list of people I'd like to thank: Elwood, Tapuak, Tox, NetDanzr, Vohaul, Mamut, all the contributors and crewmembers and also all the Spam Club regulars. Without you, The Good Old Days probably wouldn't be here today.

Active and reachable via the forum... 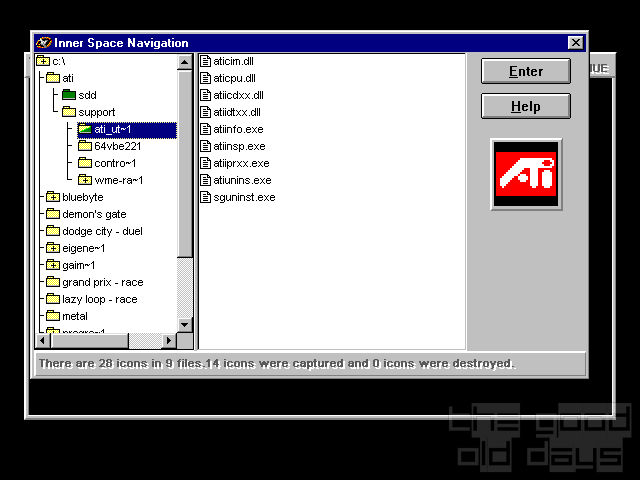