I always had a weakness for computer games. I had my first experiences at a very young age with my parents' Atari 2600. Amazed, I sat next to my brother as he routinely set new highscores in "Frogger" and "H.E.R.O.". I was still too young to play "seriously" myself, but the roots of my socialisation had been planted.

When I got into elementary school, my father and my mother (actually, it was just my father) bought a C128 from Commodore. This computer also had a C64 mode and that was how it was used almost exclusively. The reason? Games.

That was the beginning of my passion and of my many positive memories of computer games. Over the next years, I travelled all through the worlds of "Kaiser", "Commando", "International Karate", "Elite" and "Pirates!". I remember hours of "Vermeer" together with my brother. Without the chance of a pause, because to save the game, we would have had to own a Datasette drive. And we kids couldn't afford such high-tech.

Following that, I had a short and painful interlude with the Amiga 1000. Since it was only partially compatible with the Amiga 500 optimised sharing network (the schoolyard), I never really took to the graphics wonder. "North & South" and "Bundesliga Manager Professional" remained exceptions.

In between, I owned (like pretty much all boys of my generation) a SNES console. Countless hours of "Street Fighter II", "Wing Commander" and "Shadowrun" have to be attributed to that.

In the early 90s, our first PC invaded our home, and with it came the Shareware boom. Meaning at the same time, not because of our PC.

Actually, the PC had a bad start as a gaming platform. Out first IBM PC XT (or compatible) only handled monochrome graphics and to get great games like "Dig Dug" to run, we had to resort to a CGA emulator.

When the miracle of VGA entered our home at last, I got busy with "Commander Keen", "Hugo's House Of Horrors", "Police Quest II", "Space Quest" and many, many Shareware games which were distributed on Shareware CDs by appropriate Shareware shops.

When I finally got my first own PC - a 486 DX - strategy classics like "Civilization", "Panzer General" und "Colonization" haunted me even in my dreams. Later, classics like "Imperialism" followed. Even when Windows 95 came along, I was still booting into MS-DOS mode (trying to free up conventional memory) most of the time. At least when I wasn't playing the best football management game of all time: "Anstoß 2 Gold".

On the whole, I have to say that around the new millenium, hardly any new games were released which really stuck in my memory. The RTS boom based on the appearance of Command & Conquer and Warcraft 2 left me unmoved. The market for real strategy games had been practically destroyed by that. The always present 3D shooters of that time also didn't really interest me. The exception was "System Shock 2". Today, ten years later, I discovered "Deus Ex" as another one from that time, but I doubt it'll still count.

This situation had me running to the Playstation for a time, but I only ever bought two games for that platform. At least those were really significant ones: "Final Fantasy VII" I found excellent, but I never wanted to work so much in a game again. Second: "Warhammer: Shadow of the Horned Rat". I still have the words of the youthful HMV clerk ringing in my ear: "What a stupid title!"

I spent most of my time in the early millenium learning about classics of all platforms. I was overwhelmed (I still am) by the possibility to reexperience (or discover) hundreds of games for the C64, Super Nintendo, Amiga etc.

But then, from those dark days, around 2001, sprung a small Swedish company called "Paradox Interactive" which brought me countless hours of entertainment with "Europa Universalis", "Hearts Of Iron" and "Victoria". Years, to be honest. Until today.

Online games were never a strong interest of mine. I do spend a lot of time in front of the computer already. It needn't really become even more. Furthermore, there only seem to be two types of players in online games: "gods" and "idiots". Nothing is between.

On the whole, I'm open to all genres today (early 2010) as long as I don't get the feeling to be taken for a fool. Looking at my current game collection, I primarily see strategy games and the few well-done 3D games of the last years. "Hitman" or "Max Payne", for example, both already classics. Above that, a few indie games, like "Defcon" or "Soldat".

I would like to play a good business simulation again. Or a football manager. Or a good Adventure. But those genres are dead. Or rather: undead.

I rarely play classics anymore. There are multiple reasons:

First, I have already played (almost) all the classics which could be interesting to me.

Second, I got used to a certain level of comfort concerning the interface. Things like tooltips on graphical icons.

Third, games have simply become more complex at their core and thus more interesting on the long run. Whether it is the amount and diversity of objects in strategy games or the landscape and physics in 3D games or just the quantity of raw game data.

Fourth, I have to confess my patience to experience new games has diminished. My willingness to read long texts is shrinking. I expect accessibility.

That is often confused with dumbing games down. Game critics do this wrongly, because an intuitive interface is not stupid. Game publishers do this, too, unfortunately, because they actually dumb down their games based on false assumptions sometimes.

Development of truly innovative games has become the prerogative of small companies. Exceptional games like "Victoria", "Defcon" or "Mount & Blade" support this theory. My biggest, unfulfilled wish is a new football management game which is really fun. 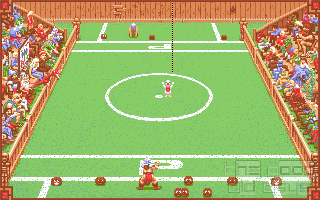