Been in love with computer games ever since I was a kid at school and heard two older kids discussing how to beat some AMIGA adventure game. Only way I could play games was at friends houses who mostly had Spectrums which were very popular in Portugal during the entire eighties. I remember trying unsuccessfully to beat Indiana Jones and the Last Crusade on Spectrum at a friend's place and begging my parents to buy me a real computer for years. When they finally agreed I would count the days until that weekend when we went to the shop and got a (at the time) very expensive IBM PS/1 2011 model (a 286 at 10MHz with 1Mb RAM, a 3.5" drive, 40Mb hard drive, and a VGA colour monitor). I was absolutely in love with it, although it was already kinda obsolete back in late 1990. It still works today and I boot it from time to time when i wanna play some really old game. I would buy a spanish magazine about games and would also watch a portuguese TV show about games and technology and find out about a new game called "Prince of Persia" that came out in 1989.
When I finally got the PC, me and my younger brother would take turns at playing Prince Of Persia that the vendor was kind enough to include with the IBM PS/1, along with a bunch of others on a box of ten 3.5" diskettes we bought that very same day. Besides Prince, we got LHX - Attack Chopper (one i still play regularly), PC-Man, BlockOut, Macadam Bumper, Gunboat, Pipe Dream, Lakers vs. Celtics and the NBA Playoffs, Outrun, The Cycles, 4D Sports Driving, Leisure Suit Larry, Speedball, and one that changed my life forever: The Secret Of Monkey Island. I remember all those games came from different pirate groups from the so-called "scene" and were inside .arj files. Took me some time to investigate how to properly work with it too!

I became a great fan of adventure games and LucasFilm/LucasArts ones in particular, getting all their PC stuff that I could (usually their games were very very rare and expensive here). I tracked down most of their stuff for PC and started a collection of mine, which could be even bigger and better if I had more storage space and actual time... I also never got a console, although I might get a PS4 so i can read bluray discs...
Nowadays I mostly play shooters, which I find are amazing stress relievers, and RTS ones. Newer games are mostly online oriented (most don't even have a LAN mode anymore) but I really enjoy some new titles to play with my son (which absolutely loves Fortnite for example but also arcade racing ones like Race Driver - Grid and Blur). 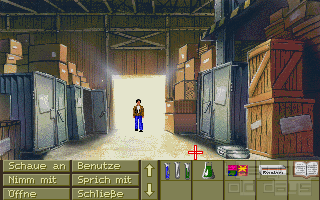