So have you had a go at the Fewest Men Possible challenge yet?

I havent played it for a while but thought Id give it a crack with the Megadrive version in Gens, managed to get down to 5 after a couple of attempts. 4 is eluding me though.

As you can read here on the site, I'm not too fond of Cannon Fodder. It just takes too long, too much effort and too much frustration to reach the parts which could potentially be interesting (i.e. driving vehicles and that stuff).

Quote:
Fighting to victory when youve been nuked before you have built your own first missile is near impossible, and Ive never seen the AI come back and win once it has been nuked.
Surprising realism in such a game, isn't it? The weapon to end all wars

Yeah those biplanes are probably my favourite, one of the coolest things ever

I like a lot of the Sensible Software stuff for their character though, Cannon Fodder is another great one, although that didnt convert as well to the consoles as Mega-lo-Mania did. I can play Mega-lo-mania on the Megadrive better than I used to as a kid on the Amiga with a mouse, I cant get anywhere near as far on the Megadrvie version of Canon Fodder as I did on the Amiga.

The thing about the nuke is this - whoever gets its first wins (im sure there are exceptions, but thats the usual case, ive never experienced it any different)

That isnt the case with the earlier technologies and its possible to fight on to victory from a worse position. Fighting to victory when youve been nuked before you have built your own first missile is near impossible, and Ive never seen the AI come back and win once it has been nuked. This isnt the case for the earlier epochs.

Mr Creosote (2007-12-07):
Quote:
its just a simple race for the nuke on the 9th Epoch giving you enough of an advantage on the 10th to spank them.
Yes, but that's basically the same for every epoch, isn't it? Atomic weapons might give you even more of an advantage than some other advances, but the whole game is a huge rush!

In any case, I like the planes best. Don't ask why, they just do it for me graphically

I think it probably does cheat in a similar way to how Civ cheats with production and/or resource bonus.

I dont really like the later levels though, not becasue of their difficulty (even with a massive reserve of men they are tough) its just a simple race for the nuke on the 9th Epoch giving you enough of an advantage on the 10th to spank them.

I should add I only play this on the Megadrive these days as I dont have an Amiga set-up at the moment. From what I remember of the Amiga version though the conversion is pretty damn good. One of the few strategy games that works well on console with a joypad.

P.S. Sorry for meddling around with this, but I really have to test the forum functions, and this gave me the opportunity to test splitting, moving and merging of topics

Also, I cant win the 9th and 10th epochs unless ive saved up a huge amount of men by starving myself on the first few epochs and can therefore throw a good 150-200+ men to each Island.

Once it becomes a race to the nuke it really helps having done those early levels with as few men as possible.

Mr Creosote (2007-12-07):
Uh... I can't say I've ever played in such a perfectionist way. Especially since I tend to get impatient on the first islands anyway, because the real fun only begins with higher technology levels

There is a certain maternal pleasure that comes with this game. You watch your people, you let them (ahem) reproduce, you share every toil and hardship in their lives, then send them off to get killed. At the beginning, i.e. the first 3 Epochs, you doubt your little minions will ever become advanced, but beware! As you get up to around the 6th Epoch, your little men start messing around with nuclear power! Suddenly, a Pike is old-fashioned, and Stealth Bombers are the order of the day.
I think that this is a great game because every level is an entire planet just like Earth. It gives you a powerful feeling to create and destroy worlds at your will, while also bringing up the question, "Is Earth just a plaything for REAL Demigods?" After all, those cute little anarchic men runnig around down there aren't all that different from us.

I strongly advise you to download this game. (Come on, it's only a Megabyte, and I can almost gurantee you'll like it enought to get past the 1st Epoch. 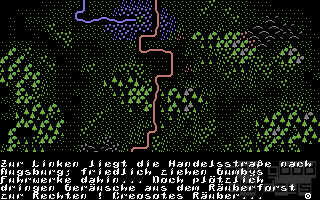