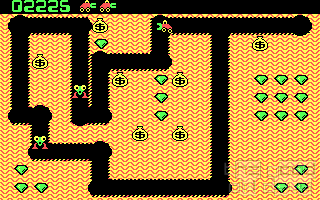 Digger was created in 1983 by Rob Sleath, one of the founders of Windmill Software, Inc. which produced nine quality games between 1982 and 1984, in the dawn of PC gaming. While completely outdated by today's standards (and even 90's standards), Windmill introduced some advanced techniques, and Digger had some of them.

On the surface, it's clear that it's inspired by Namco's Dig Dug (1982) and Rob plainly admits it. There's also a bit of Mr. Do! at play there. You control a Digger Mobile, a kind of small tunneller digging through the dirt in search of diamonds and gold, but beware! The mine tunnels are full of enemies (Hobbins & Nobbins) who would go behind Digger. Thankfully, you can get rid of them by digging beneath gold bags, which would eventually fall through the fine layer of dirt left behind, over the foes. And then get the gold from the opened bag, double win!

The Digger Mobile is also capable to shoot a single energy blast to defeat enemies, or become temporarily invincible by eating a bonus cherry. Additionally, sometimes the Hobbins and Nobbins would past through the dirt, or dig it opening new tunnels. And of course, their speed and aggressivenes increases with each level.

The game advances through levels which occupy a single screen. Each level has a different placement for the initially opened tunnels, diamonds and gold, and that is one aspect defining the increasing difficulty.

It had enough elements in the gameplay to make it a favourite among PC players in a time when the market for games in the platform was quite limited. Graphically, it was another 4-colour CGA game, with the nice touch of changing the palette between levels. The sound department was a bit different, as the author had developed a few methods of taking more advantage of the PC beeper for something else other than pew-pew and sinusoidal sounds.

Digger featured not only music in the intro screen, a simple rendition of the famous Popcorn (composed by Gershon Kingsley in 1969, and popularized by others such as Hot Butter or Jean-Michel Jarre), but also music while playing. All that with sound FX at the same time, something I think was a primer on PC gaming, or at least, a real novelty. Rob used some interrupt techniques to make it appear as if both sounds, the musical note and the FX, were being played at the same time. That technique also allowed for noise and a variety of effects that, back in the time, made the game sound very rich and different.

Digger proved to be a success, and it was one of the reasons Windmill got a deal with IBM to provide games for their new IBM JX computer which was going to be sold in Japan. The success also prompted many players to modify the game. There are lots of hacks of Digger, some simply graphical, but others adding different speeds, different initial levels, etc.

How does Digger fare today? It's still fun to play, despite the initial “slow” levels. It can be played at The Internet Archive. You can get the self-booting disk image there, or a DOS conversion, and run it with PCEm or DosBox yourself.

Two remakes have been done. One by Andrew Jenner in 1998. Andrew Jenner is the creator of http://www.digger.org/, the site for all things related to Digger and Windmill. It's a DOS application though, so again use PCEm or DosBox, or get any of the alternate versions, including an SDL port and a Java version.

The other remake is Bomberman vs. Digger, which as the name implies, mixes gameplay from both games. It's a pretty interesting mixture, and you can search for it in your favourite search engine as it doesn't have an official page nowadays. It runs flawlessly on modern Windows variations.

To sum it up, Digger is a classic from the very early days, bringing cool action in a single screen of only 4 different colours. If you were there, you probably recognize it. If you weren't, I suggest you to try it and see that, gameplay wise, it was up to par with other arcade machines but the very new PC platform.

Moebius (06.02.2015):
Heh, this was epic... but excruciatingly tedious at the same time, and i never spent too much time playing it, although it's an aknowledged classic and we should all bow to it

Cool, I wasn't aware that this game had such a cult following.

Never played it that much myself, but I still remember playing it for the first time like it was yesterday: Cool Popcorn-music (which didn't sound half bad considering the PC-Speaker) and a strange duck on wheels shooting its head at even stranger monsters.