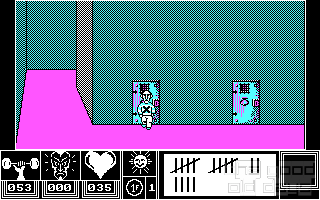 ...And the next thing you know you're in prison. Whatever crime you commited bears no importance, but what truly matters is that you're now behind bars and have to find your way out of here ASAP. Besides, what could be more romantic than escaping from a slammer? But beware, this isn't your typical prison, for there are not even guards to tease and jeer at nor fellow convicts to bully or share ciggies with. Here you are all alone, save for a bunch of security droids that seek to interfere with your plans for escape. There are also traps and other harmful devices set around to make your life difficult, so all you need now is just a little bit of luck and perseverance... if only not a whole lot more.

I'm sure many of you are familiar with this exceptionally bizarre game, but how many of you have actually managed to beat it? Boy, this was difficult as hell, and personally I would give up playing it on 3rd attempt, cause somehow it would grow extremely boring. Still, I'd never permanently dismiss it and would give it another try later on, as there was still something special about it.

So this is Eden Blues by ERE Informatique, released in 1987 for Amstrad CPC, Atari ST and lastly IBM PC. As usual, back in those days anything would surpass PC as regards palette at least, so CPC version here outscores the PC and Atari ST is undisputed winner. However, I've come to know that there are still people who admire the very poor-coloured CGA output and prefer it over anything advanced, as though it's a special thing in itself and by no means a limitation. This is for you, guys.

Starting with good points. The idea is definitely worth entertaining, overall graphical rendition is quite decent for its own timeline. Some real-time factors are employed such as day vs. night time with respective change in gameplay. Minor elements of adventure are used such as item use/exchange e.g. coins for drink/food to restore lost strength/stamina.

Bad points. Too DIFFICULT. Too many seemingly unnecessary complications. You have stamina that runs out little by little, which technically amounts to time limit, but which though can be restored by drinking. You have strength running out when bashing the doors open (ain't that the best way to get out of the prison cell!) which has to be restored by eating, but if completely exhausted and there's a door to open you're pretty much stuck. God, you can't even stay longer than about 30 seconds in some of the rooms, cause weird things start happening and again, you lose stamina. This is all very unnerving if you ask me, so getting bored with this game too soon is an absolutely normal reaction to its rather grim difficulty level. Also, there's a little lack of diversity of explored space and a variety of inhabitants. Having only small droids around, and no real guards as such makes it a little dull, and having a lot of empty cells with no inmates in them is confusing. Yes, you can actually enter any of those just as easily as yours, but it would serve you no practical purpose other than sleeping on a couch, which seems to be nothing else but another great way of wasting strength and time (stamina).

Perhaps, that's exactly what the game hints at, that your stamina counter is actually a boredom-o-meter, and when you finally reach the bottom of it you die of extreme loneliness and boredom..? Who knows. But quite frankly, I think the idea behind the game is that you need to play it several times over in order to uncover all of its traps and puzzles first to avoid them in future.

Tip: In the title section of the game where you can fiddle with counters it's wisest to set more of strength and less of stamina, cause it seems that the latter is somewhat easier to replenish. As for that thing in the middle with the angry face icon... it totally beats me, folks, but it seems to have no effect whatsoever and is best ignored. 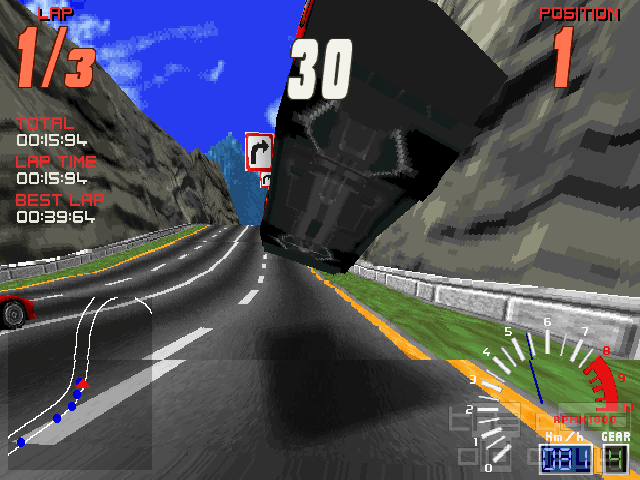