JONES in the Fast Lane
for PC (VGA) 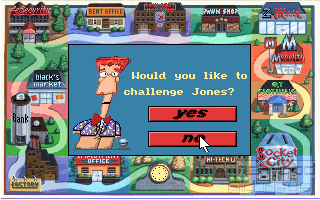 Just like many other Sierra games, JONES in the Fast Lane was developed with the Sierra Creative Interpreter. Nevertheless, it is not an Adventure game. In retrospect, you could say it is a kind of turn-based 'The Sims breaking out'.

The game can be played by up to four people in hot seat mode. After selecting the number of players, everyone has to choose aa avatar and a goal. As avatars, there you two digitized men and women respectively. As goals, you have to adjust four sliders with values for money, fun, education and career between 10 and 100 (in steps of ten). The higher the value, the more you have to achieve. If you play alone, you will also be asked if you want to compete with Jones, a computer controlled cartoon competitor.

At the beginning of each turn, each player starts at one of two possible apartments. At first, it is the one in the poor district. Although later, you can move to the rich district. In the rich district, the fun value will increase faster and there is security preventing break-ins. The rent will never increase by the way, so you should move when the prices are down.

However, you can only move when you just have to pay the rent. Or rather when you should; if you don't pay, part of your salary will just be confiscated and this saves time. Time is what you don't have. Of course, you could just relax (old-fashioned term for 'chilling out') in your apartment all week, but then you will have a problem in the next week or you've lost time because of overbearing hunger. So you should visit one of the two food sources: the supermarket or the burger joint. IN the supermarket, you can get food for several weeks, though it spoils quickly without a fridge. And the food is not for free, so you need money, which also doesn't just pour in. So off to the employment center to find a job appropriate for your level of education. This level can be increased by attending classes at the university. Also, you will need the right sort of clothes for certain jobs. At a close clothes store, you can choose between three styles:


The fourth clothing style is only available if all the other clothes are worn out (this happens about every five weeks). Depending on the selected avatar, you're then wearing a newspaper, censorship bars or a keg. Of course, you cannot go to work anymore like this, but studying is still possible. So if you don't plan to work, you will not need any clothes. Instead, you could keep your money at the bank, because your avatar tends to waste it on weekend trips or gamble it away. To avoid this, you can buy theater or baseball tickets to prevent other expenses on the weekend.

To visit the locations which are spread around the corners of the screen, you simply click on them. The avatar will then immediately start to walk there, which takes time according to the distance. Arriving, you can interact through a dialogue system in the middle of the screen. Moving, you can see your avatar dressed in the best clothes currently available.

Like in every SCI game, there is a menu hidden in the upper part of the screen. There, you can for example switch off the music, which is not really annoying, but also not a masterpiece. The graphics are on a good SCI standard. There are a couple of digitized actors in the game, which fits in the style of the game, but without producing a WOW effect. What really wows me about this game, however, is the fact that everything goes so well together. Although each individual part may not even be that great, it is a masterpiece in the big picture.

MasterLee:
It's an classic and thanks to ScummVM it runs very well under Android. Just make sure that Adlib option under MIDI is turned on. As there no F-keys on most devices use the Android back button to access menu for Status and Goal.
Moebius:
Heh.. funny to see someone has actually reviewed THAT

Never got to play it myself, and honestly, i didn't even know what it's about. Nice to see someone actually has a special taste for obscure games. Cool review, thumbs up.
[Reply] 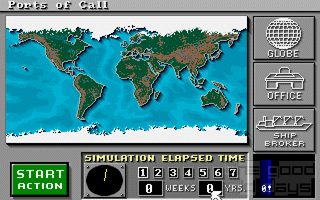