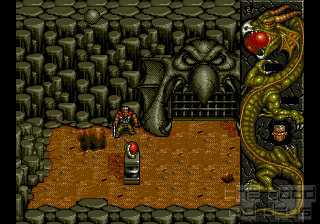 Chances are, you've never heard of Dragonstone. Released only on a dying computer platform whose parent company had just folded, it never became available anywhere else. So is this the undiscovered gem we've all been hoping to unearth in all these years? To be honest, I wouldn't have been able to tell you until now. It's been sitting on my shelf forever, but my memories of it could only have been described as vague at best. Maybe not the best sign, indicating it may not have been all that memorable, but then, let's give it a fair chance. 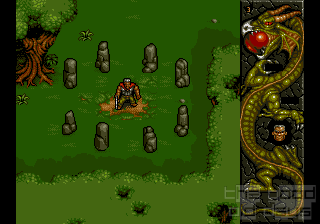 Off we go… doesn't look too shabby

Apparently, it was marketed as a 'fantasy role-playing adventure' (quote from the box). The fantasy part fits the bill alright. Without any introductory sequence, you're thrown right into the action: in a forest visually reminiscient of Chaos Engine, your sword-wielding hero is almost immediately attacked by your typical D&D style monsters, title and box cover, subtly hinting at the involvement of dragons in the plot, do the rest.

OK, so lacking an intro, there must be sort of a backstory given in the manual, right? So you'd think, but be prepared for a disappointment: the whopping three pages (!) per language are instead occupied by credits, standard virus warnings and some basic instructions about the controls. Hmm…

So let's just explore a bit. Trees, tiny streams and even mushrooms are apparently impassable obstacles for this character. Luckily, you get hold of a magic scroll pretty soon which, activated in the right places, teleports you to other regions. Other passages can be opened by solving little puzzles. At the end of the first level, the obligatory boss monster awaits you, and the second level is actually a small village with houses and inhabitants which you can interact with. 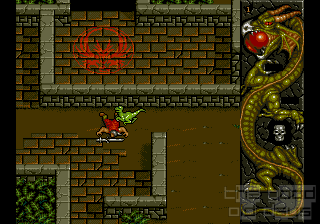 In principle, not half bad so far, if there weren't the monsters. Those act fairly random, running around with no apparent plan or purpose. Moving out of the visible area of the screen, they are obviously removed completely from the game, only to reappear somewhere else entirely again later on. Also, they more or less randomly respawn endlessly after being killed, making any trip across the countryside (literally) painful.

That is because the fighting is just no fun at all. With only one kind of strike available (only the intensity depends on how long you hold the fire button), the only tactical factor is timing. Hit at the right time, and the enemy will be struck without harming you and thrown back to approach again. Be off on timing and it will hit you instead. If there is more than one enemy approaching from different sides, there is the danger that alternating hits will prevent you from ever being able to swing again – may as well lie down and die.

What about the promised 'role-playing adventure' part? Character interaction is mostly limited to functional exchanges along the lines of exchanging one item for another one or wanting to be paid for a service. Apart from the chatty dragons who appear later on, revealing the tired 'twist' of the story (not that anyone cares). 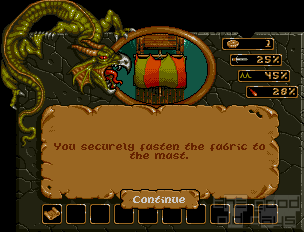 Puzzles range from obvious to laborious and overly convoluted. At the danger of spoiling something, here is something from the fourth level for illustration: you need a boat to travel to dragon island. There is a boat floating at the docks which you cannot just take, although nobody is present to stop you. A carpenter offers to build you a raft if you provide him with wood. Pretty much everything around there is made of wood: the docks, the buildings… you'd think you could maybe just grab some of the barrels, break off one of the planks of the pier or a door with your crowbar… but no, you actually need to exchange the crowbar with the trident of a statue (instead of just snatching the trident without leaving a replacement, although again, there is nobody around watching you), deliver the barrels to a woman who pays you 100 pieces of gold for the service, use that money to rent a room in an inn, go upstairs, enter another room instead and use the trident to pry out the wooden floor boards! Wait a minute… the floor of the first floor, isn't that the ceiling of the ground floor where everybody (including the landlord) is? And they didn't notice that? Seriously?

Though at least, that is still some sort of puzzle. Playing on, it is extremely striking how imbalanced the levels are. Where the first two could still – in spite of their weaknesses – be considered a fairly promising appetizer, the third one introduces many more unfair monsters and all the remaining puzzle potential is then fully spent in the described fourth one. The upcoming second half of the game is then spent in temples dedicated to different elements (earth, water, fire) where really not much is happening anymore. You're just hacking and slashing your way through from there, the only thing to ever use otherwise is the scroll. The idea being that different elemental powers are being unlocked as you become more skillful and retrieve special artifacts on the way, and those powers can be channelled through the scroll, which isn't even such a bad idea… however, the only thing you ever need to do is 'use scroll' – selecting the right elemental power is not even necessary! The worst moment of unintentional humor happens in level 5 when you have to use the scroll four or five times in a row on the same object, each time resulting in a different action automatically. 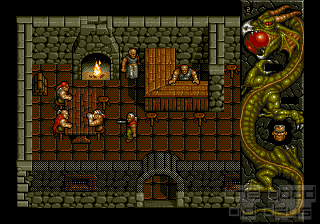 It's not just the total lack of characters and puzzles which degrades the playing experience gradually, though. Where in the first levels, the monsters you encountered – as strangely as they behaved – at least had hitting animations for their weapons or arms, keeping up the basic pretense of a fight. The elemental monsters populating later levels will simply run into you head on (with a cartoony stumbling/sliding animation no less), hurting you just by making contact.

At the end of the temples, you finally encounter bosses again, and it is the long-awaited dragons. Just that they are all exactly the same! They look the same, they have the same attack pattern and they can be defeated the same way.

This is in many ways symptomatic of Dragonstone as a whole. After an ok beginning, it loses steam very quickly. Where you may have been annoyed by the hidden passageways in the first level, you will later wish there were still any of those spicing things up at least a little bit. The absolute low point certainly being the final temple (fire) which drops any pretense of logical world building or clever level design and just drops you on a narrow path surrounded by lava and populated by countless stationary flame throwers. 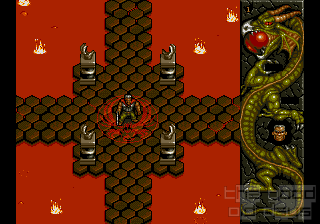 Maybe it was the rapidly diminishing market which made Core Design want to finish this one quickly to get it out of the door as long as there would at least be some people left to buy it. Maybe they assumed with fewer competing releases, customers would not have much of a choice. Maybe they thought reviewers would not get far enough to really notice the game's later stages being a total rush job. The cost-cutting manual would also fit into such an interpretation.

Whatever the reason, we're left with an arcade hack'n'slash game akin to the likes of Gauntlet which includes a couple of basic RPG elements such as rudimentary character development and the covered puzzles. A game which runs on computers, but doesn't even have the decency to let you enter the long-ish level passwords with the keyboard, but instead insists on an error prone mechanic using the joystick. A game which is hard for all the wrong reasons as it makes its few good sections and interactions short, but draws out the frustrating ones. It may be interesting for reasons of obscurity and its genealogy, but it doesn't have much more going for it, unfortunately. 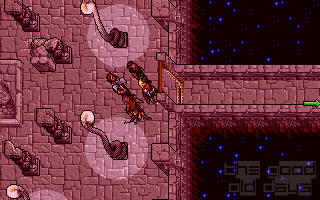