Where in the USA is Carmen Sandiego?
for PC 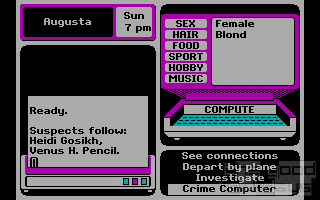 Where in the USA is Carmen Sandiego? is the second installment in the series. This time, as the name suggests, you’ll be chasing Carmen’s band around the USA, hopefully learning different facts about the country’s culture and geography.

The idea behind the game is simple: every case starts with a certain item stolen and a perpetrator on the run. Your task is to investigate in up to three locations per city, and the answers you get will provide clues about both the suspect and his whereabouts.

Any information on the suspect, such as gender, hair colour or hobbies, can be fed to a computer which will try to find a match in a central database, and provide for his/her arrest. Other kind of clues you’ll get will usually refer to geographical or cultural aspects of American cities, and are the gist of the game. This is where your general education will come into play, in order to discover which of the available destinations has the suspect fled to.

Make the right move and you’ll get reports of people seeing the henchman. Take the wrong plane and you’ll soon lose his track. Of course you can fly back and make another choice, but all this takes time and the suspect will get farther away. On the other hand, follow his steps too closely without a sure identification and your efforts will end up in a failed arrest.

The Carmen Sandiego games are rewarding, either because you know enough to take the hints people offer, or because you look the information up, and get to learn something new in the process. When I played the original Where in the World is Carmen Sandiego? on a Commodore 64, many years ago, I found it fascinating. Being a native Spanish speaker, playing the game in English was an additional challenge. Though younger players will definitely find it appealing, more mature ones will probably get bored after a short while. A wonderful take at educational games, which got the success it deserved.

Diestro:
Feel free to share anything about Where in the USA is Carmen Sandiego? (1987) here!
[Reply]