Wizardry: Proving Grounds of the Mad Overlord
for PC (DOS) 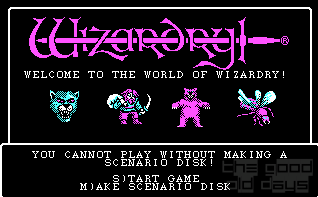 Once upon a time, the legendary world of Llylgamyn was ruled by an Overlord, appointed by the Council of Sages. When Trebor, the local hero, became the Overlord, he became obsessed with power. He found out about an artifact, a magical amulet of great power. He wasn't the only one looking for it: the evil wizard Werdna was only a step behind Trebor's efforts to find the artifact. Trebor found it first, however, only to have it stolen by Werdna almost immediately. Werdna didn't know how to handle the amulet properly, caused an earthquake beneath Trebor's castle, which creates several levels of mazes. To avoid looking like a complete idiot, Werdna announced that it was his intent to create the maze, so that he could move in at the lowest level. Trebor managed to clear out the first four levels of the maze, which he then pronounced to be his Proving Grounds for everybody interested to becoming a part of this private guard. You are one of these candidates...

Wizardry: Proving Grounds of the Mad Overlord is often credited as the first game to feature a party of adventurers, instead of a single one. In addition, the game is among the first to offer a purely first-person view, instead of the third person, or the hybrid view that was used in Ultima and Akalabeth. In addition, the game was among the first to offer a highly detailed turn-based combat, which survived with small changes till today's Wizardry 8. The game has featured ten levels of mazes, dozens of different monsters, traps, items and a very detailed character development. Furthermore, the game has set a standard that has been later followed by most Sir-Tech games: a thorough testing, which assured flawless gameplay. The game has been originally released in 1984 for Apple II, and only in 1987 for PC, with lots of bugs fixed and the gameplay improved.

The main strength in the game lied in the dungeon design itself. While ten levels does not sound like much, the mazes were so hard, featured so many traps and confusing turns that mapping them and orientation even with the maps became a very hard task. This phenomenal dungeon design, which was surpassed only by later Wizardry games, allowed the player to get over 100 hours out of this game. The secret of the dungeon design was a scrolling maze, where you were not limited to the 14x14 squares, but could cross the border only to appear on the other side of the map. The second strength lied in character development: with each level your character statistics improved, and with high enough statistics you could switch to more powerful classes. Alignment played a major role as well, as some classes needed to be of a certain alignment. However, opposing alignments refused to travel together, which allowed for some strategic thinking when creating and leveling up your characters.

On the other hand, the game has suffered a serious problem, which was present in Wizardry games until today: the game seems a little sterile. It does not capture the player's imagination the same way the Might and Magic or Ultima series do. All the time you will feel like a person sitting in front of a computer playing the game, and not as one of your characters, in the middle of the gaming world. Despite this shortcoming, the game is fully worth your time.

About the authors. The two main designers were Andrew Greenberg and Robert Woodhead, who later designed Wizardry II and III as well. They created WizI as a part of a bet that Greenberg accepted, forcing him to think of a way to translate the Dungeons and Dragons system onto a PC. When they designed the game, Greenberg and Woodhead didn't seem to lack humor: Wizardry was full of Easter eggs, the most prominent of which was the names of the two main characters, which were the designers' first names, spelled backwards. While both were credited with participation on other games, only Greenberg designed games after leaving the Wizardry series. In 1989 he helped designing Star Saga: Two - The Clathran Menace for Electronic Arts, and in 1996 he designed Emperor of the Fading Suns for Sega Soft.

Don't enter this game unprepared! It's certainly not a pick up and play type of experience. You'll have to at least read the manual thoroughly, but I also recommend doing a bit of research on how to form a good party. Then, get some graph paper and map out every step you take or you will surely get irrevocably lost in this maze-like dungeon. This is an unforgiving game, but if you take it seriously and put some effort into it you’ll make it out alive.

There's barely any sound apart from the occasional beep and there's not much in terms of graphics either. However, the enemies look really nice and it's one of the few games that I think looks good in CGA. That's just for the remake though, the original release which was based on the Apple II version looks horrible and limits the graphics to a tiny corner of the screen. But then again, who plays these old games for the graphics anyways.

The gameplay is still really fun. This is the original menu based battle system that would inspire practically all JRPGs to come, after it was adopted by Yuji Horii for his Dragon Warrior games. You'll either love this game or find it incredibly tedious depending on whether you enjoy mapping out the dungeons and whether you can handle the steep difficulty.

This game is certainly worth a try for any RPG fan. Together with Ultima this game formed the foundation upon which all RPGs would be based. But tread carefully, this is a treacherous dungeon indeed! If any of your characters die the price is steep to get them back. Honestly, I often found myself reaching behind my PCjr for the power switch when my battles went poorly. Cowardly, I know, but it's sometimes better to restart than to pay for the revival of you fallen party members. 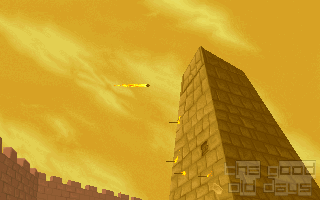