I, Damiano: The Wizard of Partestrada
für PC (CGA) 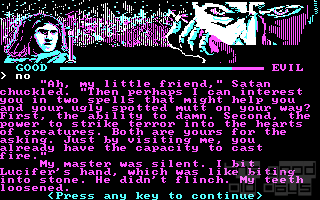 This fairly unique and obscure interactive fiction game is loosely based on a fantasy novel „Damiano“ by R. A. MacAvoy. It was originally written for Apple II computer, but also ported to PC as PC Booter. Graphically speaking, PC version is as always a little behind since CGA mode was practically the only option available in 1985, but… it appears to be one of those seldom cases when CGA meets the setting quite well, while matching the game's gloomy twilight atmosphere. The design is tad unconventional, which is a part of its distinctive charm. The image section is a little scanty but somehow more than sufficiently descriptive of the situation. Furthermore, the graphics are partially animated and the game uses what seems to be a pseudo 3rd person perspective – you can see the protagonist, but he is mostly static and confined to the left side of the game panorama, which isn't a bad thing, quite ingenious on the contrary. I think by these criteria alone it beats most of the known IF titles.

And now to some minor so-called limitations which have unleashed a storm of criticism. First off, you don't look around in this game and get the traditional possible directions like North, South, East & West, but rather just immediately teleport yourself to the desired location should you have the name and purpose. Secondly, you don't examine the objects and characters yourself, it is done for you automatically if any urgent. There is no inventory, but you never carry a large number of objects anyway, so it's hardly a deficiency. There are no real dialogs and few questions to ask, you get away with general keywords mostly like „hi“ or „ok“. However, I don't deem any of this a disadvantage, as it by no means diminishes the thrill and amount of challenge presented. The only real minus perhaps is a little poor vocabulary. You may often get stuck not because you don't know what to do, but because you don't know how to make yourself understood by the game. 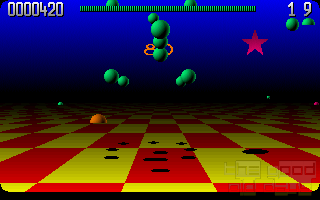