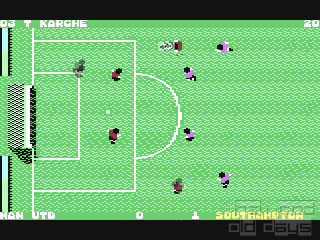 Weee...yeah, I know I know, I'm a Championship Manager addict, too

but since there's no CM for a C64, we'll have to use something like this, eh?

), 1st Division Manager is an option for those who want to make a carreer out of this.

When you start the game, the first thing that makes you realize there is something good about this game is the year: 1993...quite new for a c64 game, isn't it? Still, this doesn't mean it's exactly better than other football management games.

And we'll see why. First of all, the license for the F.A. leagues is non-existant. You will need some time to accomodate with the fact that there's no sign of Eric Cantona, Jurgen Klinsmann and the likes of 'em. Besides that, I've had a serious difficulty in finding players (since we were talking about Klinsmann...) who play in foreign countries. Not a sign of them, it seems that England is the center of football.

Aside from this, 1stDM is a medium-ratable game. The interface is intuitive (mouse support is a plus, and the cursor is really nice) and usable. A minus goes for the tactics screen, as you are not allowed to pick different positions for the players (e.g. you can't play 3-5-2 because there are only 2 DC, 1 DL and 1 DR and you can't change that), but it doesn't matter anyway as you will SURELY play 4-4-2.

The matchview engine is, on the other hand, very good. The players show signs creativity (although they abuse of the long passes and shots and there's no dribling). The matches show a great deal of spectacle for a Commodore machine, and they are interesting to watch. There are some special effects that work out well, and, one by one, the field simulation is good.

Speaking of simulation, we'd also have to look at the realism. Unfortunately, the realism is quite inexistant here

. First of all, players are rated with a skill that seems to be from 1 to 5. However, in the Premier League at least, there are only players with 3 and 5, I don't know about the lower leagues yet. There are no such things as DL, DR, DC, ML, AML, DM RLC, a player's profile is only G, D, M, A, and the positions on the field are limited. The players can be trained, but that's fairly primitive and, generally, of little use.

However, the CBMs don't have too many footie management games available. Which means that we can play this one, or some other games that aren't exactly better than it (reviews going to follow...). So go on, go on, play it, nothing, ABSOLUTELY nothing to lose. 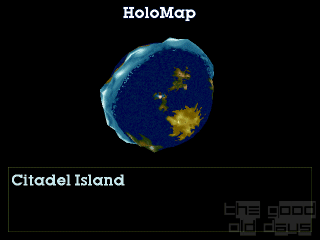