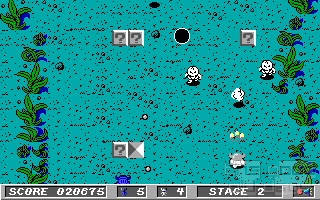 Time to bail out from your jetfighter, put on armour, helmet, grab some arrows and step down into the classic fantasy world with top-down scrolling, where your job is still pretty much the same: shoot 'em up, stay alive and reach the end of the line. The story so far: you are Popolon the knight, your beautiful bride Aphrodite has been kidnapped by some Hudnos (now who the hell is that, anyway?), and you are to rescue her. Sounds incredibly original, doesn't it? Just this time no enemy planes or spacecrafts to destroy, only good old hordes of evil spawns blocking your way to success. Welcome to Knightmare!

Once again I was on the fence whether I should review this or the original MSX release. Only this time apart from having played the PC version only and having been ignorant of it being a freeware port from the russian hacker group called Friends, I have yet one more reason to back up my decision, and that is the digitized sound effects played via PC Speaker and magnificent title music which is one of my all-time favorite tracks, and which peculiarly enough seems like it was blatantly “borrowed” from ZX Spectrum's Ramparts. There remains, however, one worthy excuse for Friends: their edit sounds a good deal better, after all. By the way, the castle on the title picture was also “borrowed” from another Spectrum game Olli & Lissa. Took me years to realize that, though.

In the game you move across scrolling screen, shoot and avoid various creatures and their projectiles, cross the bridges and shoot grey squares with question marks holding bonus and special aid objects like temporary enemy freeze, mass destruction or in very seldom cases a portal to next level (hidden squares). Your can also upgrade your weapon, speed up your character, receive shield and other charity. On every new stage enemies multiply as well as new species are introduced which get increasingly more cunning and dangerous (including the bosses). Likewise, your path becomes more encumbered and you are more likely to get stuck in the bottom of the screen where if pushed outside also means death.

Beginning with stage 3 the game gets extremely difficult, and if you survived the first 2 stages with little or no loss at all then here you will have to lose life after life and probably never get to see the boss. Shooting squares here serves mostly to clear your path or complete bridge structures, where another challenge is to figure out quickly which bridge to cross/complete. As a matter of fact, this is exactly where my journey ended. To my shame, after all these years I still can't beat the game, and I don't seem to have enough patience for it either. Moreover, the game is pretty buggy (which you are kindly warned of at the title screen) as it frequently crashes with some error, thereby gravely compromising your progress.

It's a pleasant surprise that if you die you don't lose your current weapon like in a myriad of similar games, you just keep using it until you decide to replace it yourself. Hallelujah! But somehow it doesn't make the game easier. Here's another strange thing which I suspect to be a sloppy hack of some kind: you have a total of 5 lives as indicated in the bottom panel, but when died once it suddenly changes to F, which then goes to E, D, C and finally 5 again. Ironically, even that doesn't seem enough. In other words, what makes this game a little offputting is its unexpectedly relentless behaviour. Perhaps using 2 players could lessen it somewhat, which is, by the way, supported by the game, but I never got a chance to try.

Honestly, I think apart from music and sound MSX version is a lot more agreeable gameplay-wise, but since I never really played it I can only speculate.

Moebius:
Feel free to share anything about Knightmare (1992) here!
[Reply] 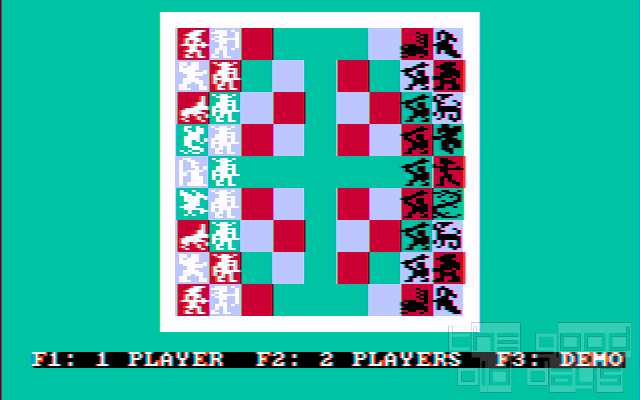