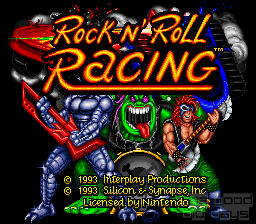 I just want to mention this: This game has absolutely nothing to do with Rock 'n' Roll. Why the game is called this way I don't know – it can't be alone due to the fact that 'Born to be wild' is constantly coming out of the boxes.

Enough said about that, let's look at the game itself. It takes place at numerous race tracks on fantasy planets – so political neutrality is guaranteed. First you choose a character and buy a car. In a normal game you start in the lowest league and have 10 races to finish during one season.

You drive your car from an isometric perspective around the high tracks and you compete against three opponents. You can beat them not only by better driving but also by using the available weapons. You're allowed to do everything to reach the winner's podium. At the beginning you just have a small laser gun and some nails you can spread on the track to damage your opponents. But between the races you can upgrade your car: From improved armor to better tires to a rocket launcher you can equip your car with everything a modern race car could need. You can even buy other race cars with different racing characteristics. You earn the money for these transactions by successful races.

The races are quite entertaining and frantic (in a positive way). A single race lasts for about some minutes so you won't be afraid of those sometimes too realistic F1 features ('Lap 152 - let's change into third gear'). There's no such nonsense here as is clearly obvious by the lack of brakes. The damage you suffer during a race doesn't mean instant end, they just throw you back some way. But you do the same to your opponents as well!

When you have reached a certain score at the end of a season you're promoted to the next league which takes place on a different planet with different tracks and characteristics. And of course the difficulty increases as well. But it is well balanced and will fit to beginners and experts alike.

Besides the league mode there is an 'Vs Mode' which allow the player to race on all tracks with fully equipped cars. That means even more action as money doesn?t play any strategic role anymore.

Rock 'n' Roll Racing is convincing due to simple handling, easy start and adjustable difficulty levels. These make this game replayable in contrary to many other similar games. A 2-player game adds to this good impression. The only negative aspect is that the race tracks could be a lot more variable.

Marhasan:
This game deserves a 6/6!!!
ass a lot:
cool
Dai JiaHong:
Great ! I can play this game for centuries
Da_Goat:
I'm glad to see this got an accurate score. Many people don't see it as the unmistakeable gem it really is. Some say it's an "acquired taste", but in my opinion, this should appeal to everybody. The small tracks are better than the larger ones, but that doesn't really matter if you have a good weapon. Buying new weapons and parts for your car is really cool, as well. The hours of fun that seemingly emenate from this game is yet another reminder of how the SNES is undeniably better than all other Nintendo systems.
FrEaKyBeN:
This game is one of the greatest SNES games i know. It was also my favourite game when I hat a SNES console.
FITZ:
that's OK(I THINK)
mannie:
good site!!!!!!!!!!!!!!!
Tapuak:
Feel free to share anything about Rock 'n' Roll Racing (1993) here!
[Reply] 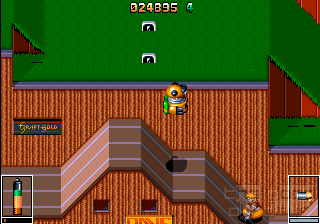