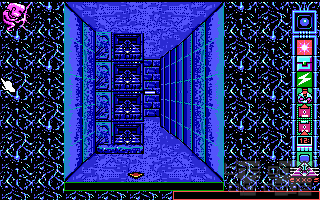 Atypically for an Adventure game, your own character will not appear on screen. Instead, the current view is the player's perspective. The viewpoint, however, is not scaled to size, as all the other figures are shown very small. Lacking a concrete reference object, maybe even an animated sprite, the active role of the player is reduced to observer. You never have the feeling of actually entering scenes, but only pick them through logical links and passages. The effect is increased by having the transition between rooms happen abruptly and in some cases, the newly entered room will be shown from a completely changed perspective.

You meet completely bizarre creatures and structures from a religiously-controlled lizard society which tries to get its very own reality across. You are supposed to experiment through a complicated, interactive brain symbol and a menu bar. With a lot of patience and ideally just using a guide, you solve absurd puzzles which put anything non-trivial from Monkey Island to shame.

You meet an old mummy waiting to be resurrected. You witness a ritual sacrifice on the altar of the god Deilos. In the end, you unmask the villain behind all these cruelties, Protizm Harssk. From his clutches, being the true selfless hero that you are, you free your lover Sci-Fi and take the bad guy down. Although you don't ride into sunset on a horse, you do take a spaceship to the far reaches of the galaxy.

So overall, in spite of the phantastic, exotic ambience, the plot remains remarkably shallow.

The game intentionally goes for exaggerated otherness which demanded a large amount of imagination and empathy from me as an open-minded player. Without the explicit plot, I would never have thought that this is supposed to be a post-apocalyptic scenario. Rather, the impression is one of being on an alien planet. There is almost nothing human. Apart from maybe the merchant, i.e. the Changer who hands over the desired components in the frame of the shell game, as it was offered by eastern european gangs in pedestrian areas in the 90s. Fortunately, random chance only plays a minor role overall. Fights are basically won automatically using the right weapon. Up until this point, the extend of creativity remains bearable.

Though what in god's name is this fetus doing in the upper left corner? This is where things cross the border towards tastelessness. This creature called Gauss happens to be the telepathic link to the neural network of the human Tuners who are above regular mortal humans thanks for their Psy Powers. It recites word fragments which only make sense when spoken out loud. Some reviewers praise this character's black humor. I cannot agree with that. For me, this is where the dutifully conceived atmosphere of the lizard temple finally gives way to a totally meaningless cabinet of curiosities.

Unsettled, I also notice that the graphics of the PC version cannot hold the candle to the original Amiga version's. The colours in EGA mode are sometimes too garish and have too much contrast, without blurred transitions. There is even an obvious programming bug which displays one specific colour as transparent. The resulting white pixels can be removed using a patch according to an Internet source.

Sound consists of a science-fiction-like buzzing and beeping, as if it came from an oversized slot machine. A recognizable, coherent melody to support is missing.

Appropriate to the market, the French development team produced the game in three languages (French, English and German) and for three systems (Amiga, Atari, DOS), before one year later, a new publisher brought it to the American market under another title (Chamber of the Sci-Mutant Priestess). The German translation has been done very professionally, as the whole game did not do anything wrong in its professinalism. It is only the completely overdone manner of a basically promising graphical concept, which apparently is supposed to take away the attention from the less than perfect puzzles and the hard to believe plot, which deserves to be critisized. 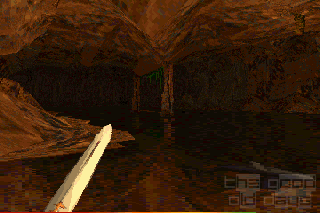