Behind the Iron Gate
for Amiga (OCS/ECS) 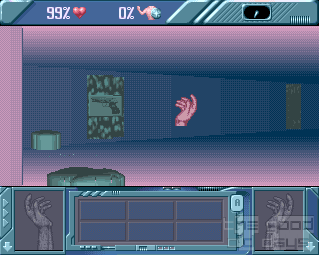 If there was one thing Amiga users really envied IBM users for, it was the pink and cyan colours of CGA, wasn't it? And by the mid-90s, also 3D shooters, obviously. Good news: Behind the Iron Gate fills both gaps!

Now, of course, the graphics are actually far from CGA. The game takes a very different graphical approach compared to what was common at the time. Instead of following Wing Commander and displaying everything as pixel models which are “rotated” and “zoomed” only by exchanging variants of the same sprites/textures, the Ego developers actually went for polygonal models. Which, you may think, is really good for a 3D game.

To make movement somewhat smooth even on the aging A500, hardly any textures have been used. Meaning everything looks very barren and lifeless. Robot models (the plot talks about evil robots rebelling) are actually sort of bearable. If only there weren't these colours: everything is tinted in pink and cyan! Tinting things in few colours has always been a pretty standard technique on the Amiga to save processing power, but why of all these?

Controls are the second point of complaint. Providing four different control modes, going from a full mouse to a mixture of mouse and keyboard. In this way, Behind the Iron Gate actually appears much more modern than its contemporary games, for example by allowing separation of movement (via keyboard) and aiming of weapons (via mouse).

Nevertheless, things just don't work out, as simple actions are just way too fussy. Apart from just being plainly unresponsive to mouse clicks (never a good idea in an action game), the interface expects the player to manually juggle not just with inventory items, but even equip and unequip items from the two hands constantly. For example, to pick up new ammunition, you actually first have to unequip something to have an empty hand. To flip a switch, same thing.

Formally, everything may be there. This genre's gameplay always only revolved around opening doors, collecting coloured keys and shooting enemies in between. Just that instead of fast and furious, Behind the Iron Gate is slow and uneventful. The main activity is getting lost in featureless corridors of which the game refuses to make a supporting map on the fly. Being butt ugly doesn't save it, either. So, sorry, but no. Underwhelming. 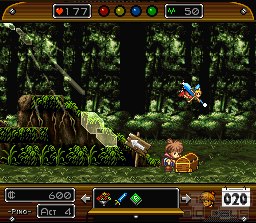