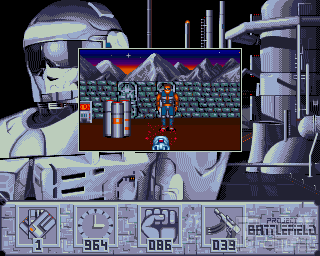 Let me excuse myself upfront. I don't speak Polish. Yet, this game just looked too interesting to pass up. So forgive me if I don't go into the (undoubtedly) intricate storyline and the subtleties of all gameplay options (even if I had a manual, it wouldn't help…). Let's just say Project Battlefield is a 3D shooter and so most of it should be self-explanatory.

Interestingly enough, its visual style is strongly reminiscent of Wolfenstein 3D (and all the derivatives using the same engine). Meaning the usual 3D maze gameplay (walking around, opening doors, entering teleporters, generally shooting anything that moves and refreshing supplies on the way) is illustrated in a rather cartoony style. The size of the main window can be adapted considering processing power. While the smallest size works very well even on a standard A500, the largest one (“almost full screen”) is unbearably jerky even on an 50Mhz-accellerated A1200. So definitely, the rather basic and inefficient 3D engine cannot be considered a big selling point. On a sidenote, screen size can only be set at boot time, which can get rather annoying to try different settings out.

Putting also the sometimes strange behaviour of two-dimensional objects projected into a 3D world aside (try to look at a barrel from different angles…), the game's main issue is actually with visual feedback. Instead of an allusion to walking, the viewpoint simply glides smoothly. Shooting at enemies, there is no visual feedback whether they have been hit. Same the other way around: no visible impact upon being hit. Needless to say there is no visual indication of the enemies' health status and even your own is only counted through a number rather than an icon/picture/colour.

Everything really screams of a typical case where somebody wants to play around with technology, but simply isn't a good game designer, so they just do something half-baked. Problem is that such games usually become boring very fast. If then, the technology side isn't even impressive to begin with, it won't hold your interest for more than a couple of minutes. Or maybe I am indeed missing a significant part of the game? 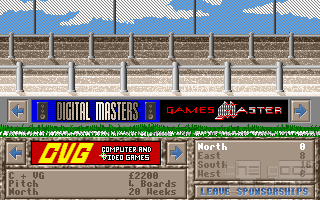