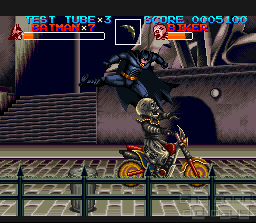 A common day in Gotham City: Batman puts on his chicle coat, and with his Batmobile he drives to the place of action. Through the slits of his ridiculous mask, he sees the unjustness. Good citizens are being hindered to do their Christmas shopping. A gang of clowns prevents a fluent and free enterprise and causes a setting that reminds of an oriental bazaar.

In order to restore law and order, Batman runs from left to the right and takes them to task. Like a pestilence they are spread all over the city. Batman finds them and cleans the places from the mob. One after the other serves his sentence by being killed and then dissappearing forever.

But in spite of his murders, Batman does not manage to be better than average. He does not have anything new to offer, he beats them up like his friends in Double Dragon have been doing for years. He is solid, but he can't think of anything besides some standard punches and kicks. Thus, his creativity is equally low than the diversity of his enemies, who make use of the common means as well - a flamethrower does not help much.

Moreover, Batman is apparently swamped by this task. Even if he kills hundreds of them, he recognizes that his energy bar does not stop shrinking and getting closer to its complete disappearance in every minute. Batman notices that he was relegated from the elite of superheroes to a guard in the gambling house who has to protect this game from being destroyed by disappointed customers.