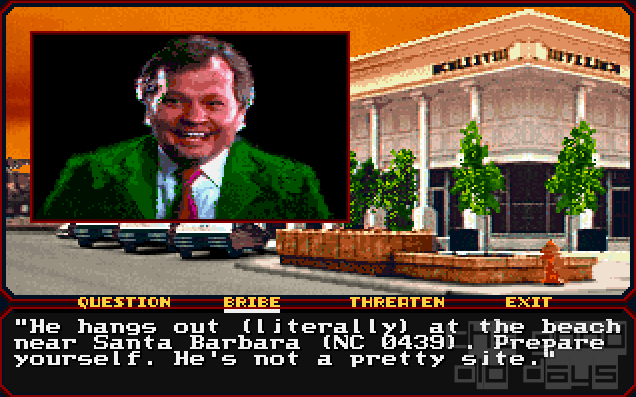 The first installment of a very nostalgic series to some: Mean Streets is the first game in the world of Tex Murphy. A deadbeat detective from the typical Film Noir era who gets himself caught in his first adventure set in the year of 2037.

Tex is asked to delve into the death of a beautiful young woman's father, Carl Linsky. Ruling out the 'official report' as suicide, Tex embarks on a story to prove the young woman's theory that he was murdered. A story full of intrigue and a giant web of lies and secret agendas.

If you play this game for the first time, take your time to go through the manual first. As with any older games, jumping straight in without any knowledge will make the experience quite hard and might result in an early exit.

The first thing you end up in is Tex's awesome looking Speeder, which looks somewhat of a crossover between a Lamborghini and a DeLorean. The Speeder part of the game is basically a simulator, where if you're airborn it handles like a plane (rolling and banking) but if you're on the ground it handles more like a car.

Start off by using the featured Auto Pilot by inputting your Navigation Code (or NC) into the computer and engage the Auto Pilot. Enjoy your first rides like this and learn a bit by looking at all the instruments.

NOTE: using the Auto Pilot will enable the Speeder to go MUCH faster than you ever would be able to in Manual mode, up until the last 10-12 miles. It's always advised to use it for travel distances over 10-12 miles, then switch to Manual when you've slowed down.

Mean Streets is actually very well written and thought out. The stereotypes are very familiar and lean strong on the film Noir genre. The more you play the more you start to understand what kind of world you're living in, and every step takes you closer to finding out the truth of what happened to Carl Linsky. Along the way you will seriously laugh often, enjoying some funny dialogue or interaction combinations (see PUZZLES) which lead to unique responses from Tex.

Once you've arrived at a location and step out of your Speeder you will often end up meeting a person who you can ask questions to by typing in other people's NAMES or a select few TOPICS that have conveniently been added to the manual. There will be times where you need to lean on Tex's Bribe skills, and others where you can try to Threaten people.

SAVE YOUR GAME OFTEN BEFORE STEPPING OUT OF YOUR SPEEDER! WRITE DOWN EVERYTHING!

Sometimes after arriving at a location, you have to pass through 2 levels of rather simplified combat. Doing so will consume Ammunition, so fight carefully and save often.

Finally, there will be a handful of locations where you can actually walk around and use a very interesting system to LOOK, GET, MOVE, OPEN, TURN ON/OFF or TASTE objects of interest. The puzzles are straight forward, but the main rule to follow is to leave “no stone unturned”..

Dying is something that seems to ONLY happen during the PUZZLES. Be wary of dangerous situations!

In order to gain more cash there are a few Coordinates (not Navigation Codes!) you can fly to and fight through some tougher battles. I actually haven't done so because I didn't need extra cash, having made quite enough by pawning everything of great value that I found while doing the Puzzle areas.

Considering it was made in 1989, the graphics are actually really nice. During dialogue, digitized photographs are used and can be seen animating. The simulator uses a nice technique (similar to Stunts) to draw depth and make objects appear big or small depending on distance. Last but not least, the pixel drawn Puzzle locations are of good quality as well.

One of the early games to use software called 'RealSound', which enabled the use of the PC Speaker to play pre-recorded sounds without the use of any additional hardware. This was pretty revolutionary at the time, considering most other games only used the 'beeps' a speaker could output to generate music or SFX. The amount of unique sounds in Mean Streets is limited however, so expect to hear certain music more often. However, finding more unique sounds (or dialogue) is a reward in itself.

+ Enjoyable story and characters
+ Great world building and ambience
+ Cool Speeding around in 3D San Francisco, L.A. and Vegas (amongst others)
+ Use of PC Speaker to play voiceovers and pre-recorded sounds
+ Unique interaction system tree
- Spending some excessive time in the Speeder while going from location to the next
- Combat is not really challenging once you get the hang of it (I didn't do Bounty Hunting though!) 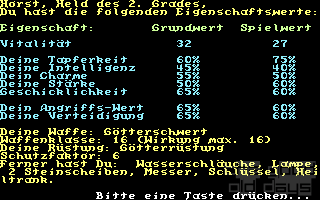