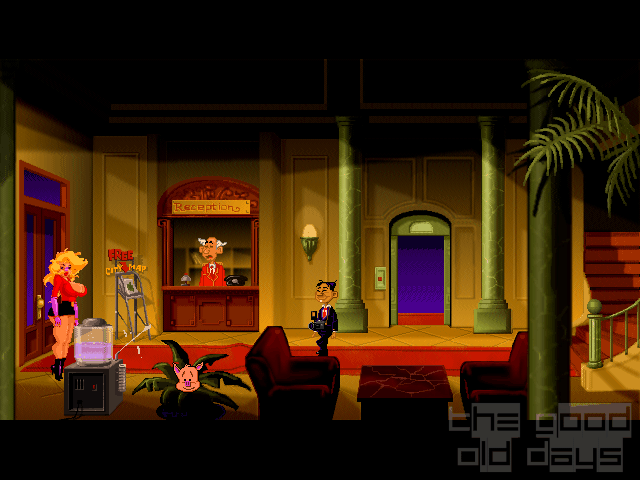 If you look up the idiom skeleton in the closet, there should be a big picture of Bazooka Sue for illustration. First announced in the early 1990s, the “almost finished” game was shelved when Starbyte went under. The development team left for Blue Byte where they made similar game (Chewy: ESC von F5). Two years later, someone at the “revived” Starbyte decided to open the closet. Only they neglected to dust off what they found in there.

If you think you have seen “over the top” already, you will reconsider after playing this game. Though you will also realize that there is such a thing as going too far. Already on the cover, you have this super-deformed female with pig feet, nose and tail, but also huge breasts, carrying a chainsaw and stepping on a human skull with eyes. Who drives a pink convertible through the extremely silly intro sequence and arrives in town carrying several magazines containing pornographic pictures of herself (don't worry, you won't get to see them in-game). 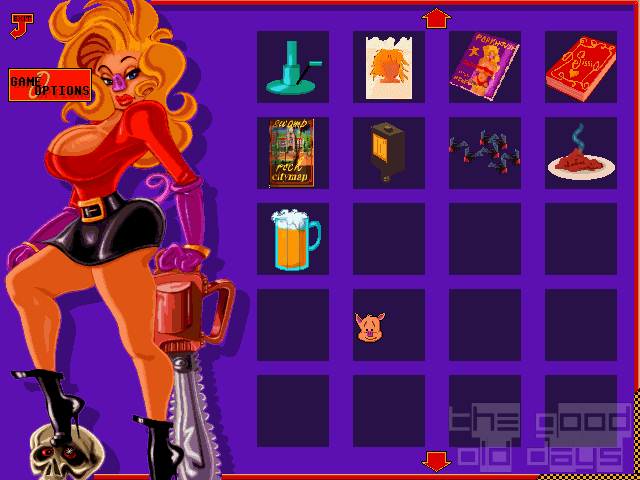 The issue here being that Sue and her antics are plainly silly, without the slightest hint at irony to soften the sexist (obvious), racist (grinning Chinese tourists taking photos) and honestly, overall ridiculous impression. Considering you still want to play a character who is the walking embodiment of the oldest “stupid blonde” jokes in the world and whose dialogues are unbelievably moronic, read on.

The game makes an attempt to follow cartoon logic. Only it does so in incredibly stupic places and illogical ways. For example, what is the best way to get some dead flies (don't even ask why you need them)? Why, you punch the landlord of the local pub in the face, of course, because, you see, he hasn't showered in a while and flies are buzzing all around him. Don't worry about any side effects. You get the flies, but the guy will still talk to you, cook for you etc. as if nothing has happened. On the other hand, in a shop run by a certain Tex Avery, a rake is standing prominently against a wall. Though nobody ever steps on it!

Speaking of Tex Avery, the protagonist makes very sure the player understands this “insider gag”. Immediately stripping it off its insider status. Without even entering into the question of whether name dropping and recognition itself is a valid humoristic strategy (Family Guy made a huge business out of it, so there seems to be a target audience who can laugh at “I know this!”), Bazooka Sue isn't even content with just “nudge, nudge, wink, wink”, but it insists on explaining each of its “jokes” at length: “This is the guy who brought us Bugs Bunny, Daffy Duck…” In the same vein, it is not enough to have a motel with a towering, gloomy house in the background or a woman sitting on a school playground attacked by birds. Don't worry if you don't have an immediate idea: the game will tell you where these are from. It hits rock bottom when the protagonist actually meets its own developers at the Starbyte offices, going full circle in self-indulgent and incredibly unfunny self-reference.

Plot, storytelling and worldbuilding aside, rough edges show in all other places, too. The one puzzle already described earlier unfortunately represents roughly the middle ground on the quality scale the game covers in this respect. When the protagonist tells the player she hasn't done everything necessary yet and therefore cannot leave a place, it is always a bad sign no matter what (internal vs. external logic). Though if it then turns out that the issue was her car being blocked by others and the trigger for these cars to go away is to lose a game of pools and stripping for two greasy guys (not the owners of the car blocking you), it's clearly worse – where is the causality between these actions and these events? 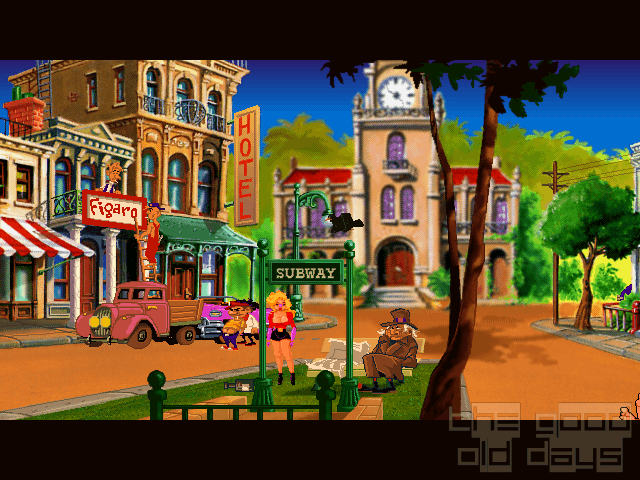 Graphics are generally not too bad, the backgrounds being competently drawn and (ugly style aside) the characters are also acceptable. Little background animations help the overall impression. Ironically, the protagonist's animation is not up to par. Her “walking” isn't just mega slow in worst Sierra tradition, but also looks silly – and not in any intended way, but rather due to having too few states. Scrolling is even worse: although configurable, the only choices are “somewhat smooth, but even slower than the slow walking speed” (so you have to wait for the screen to move all the time before moving further), or mega jerky.

Controls are somewhat alright with a context sensitive verb menu, at least where you don't have to do pixel hunting. Conversations, content and tone aside, are really awkward, with neither placement or colour indicating who is actually saying what. Voice acting sounds quite amateurish, with everybody either being apparently bored or trying too hard to sound “crazy”.

The latter summarizing the game as a whole. Bazooka Sue tries way too hard while not offering even an ounce of originality. Sure, it is unpredictable, but not in ways which could be seen as positive surprises. Its twists and turns are completely arbitrary. Good cartoons actually follow a strict logic (even if it is often intentionally obscured) and have a consistent theme. Bazooka Sue is all over the place, but without ever hitting any mark. Technical issues with the engine can be forgiven (especially with such a troubled production), but not bad game design or storytelling alternating between boring and annoying. 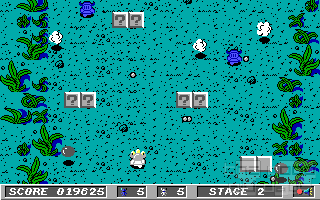