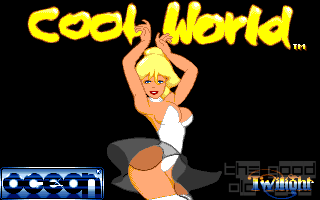 Cool World, the movie, is now rightly forgotten. Even at the time, it was clear that this game, published by Ocean's licencing machine, wouldn't be particularly noteworthy (putting it mildly). Though sporting a curvy female cartoon likeness of Kim Basinger, it was obviously sufficiently tempting to be prominently featured on a number of magazine covers. A character who – in typical Ocean fashion – doesn't appear in-game after the introductory sequence anymore, either.

Instead, the game features the male lead running through the streets, forcing unauthorized entry into people's homes and enforcing racial segregation by deporting innocent “doodles” into the void. The game's justification for those decidedly non-heroic actions being that their presence will disrupt the time-space continuum and finally destroy the world. Or something. 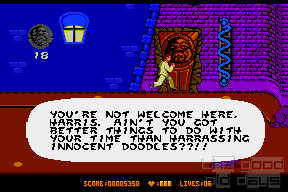 Mechanically, the player shoots the enemy sprites, who then turn into ink blots, which can then be vacuumed. “Cleaning” a stage of all trespassers finishes the level and moves the player back to the street where the next door is waiting for be opened, provided sufficient entry fee money is available, but that can be earned shooting animals and punks on the streets (of course). Rinse and repeat until designer and publisher consider game length sufficient to market it.

As most Ocean film licence games, Cool World is not fundamentally broken or flawed in a purely game mechanical way. Graphics, animations and controls are serviceable. Nevertheless, the game formula applied is just too limited. Gaining entry into new levels? Purely a game of patience to collect sufficient coins. Catching straying Doodles? They move about randomly across platforms which follow no particular functional layout. The only thing ever changing is the graphical design of the backdrops and even that mostly just based on colour swapping.

As flawed as the movie may be, at least it isn't uneventful. Cool World, the game, feels just like busywork. If it were a piece of art providing some other sort of intellectual stimulation, this may be acceptable, though it is obviously intended as a bland piece of entertainment. Which it fails to be.