Temple of Terror
for ZX Spectrum
Also available for: Gamebook 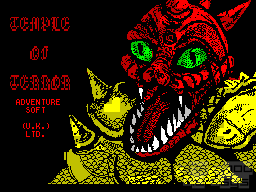 You'd think the underlying book would lend itself perfectly for adaption into a text adventure. After all, what were most of these about at the time? Right, collecting a number of treasure items hidden somewhere in the scenery, often behind dangerous spots. Temple of Terror, both book and computer game, sends you on a mission to find five dragon artefacts hidden in the desert city of Vatos. A perfect match if there ever was one.

Problem is that apparently, neither this established gameplay foundation, nor the book's plot (for details of which I'd like to point you towards our already published discussion) was found very inspiring by the authors of this game conversion. Rather, it brought out the worst in them. Because what we are facing here is a series of uninspired locations. Uninspired on both terms.

Gameplay-wise, it's chock full of instant death traps (something the book actually mostly avoided) which can only be avoided by trial & error, and other puzzles revolve around killing monsters blocking crucial pathways. For such "combat", the designers chose to move away from the luck-based dice combat which had still been present in Seas of Blood. Instead, each opponent can be overcome by a specific item. Most such monster-weapon combination appearing totally random.

As far as plot and worldbuilding are concerned, all that may have been considered interesting or atmospheric in the book has been stripped out. You visit similar locations, have similar encounters – but none of it is infused with any background, any meaning anymore. To illustrate, consider meeting the little creature in possession of one of the dragon artefacts. The book introduces it as a stranger to this town who arrived here years ago and decided to stay in the shadows of the city. Unnoticed by any authorities, it just started collecting objects, trading things it considered pretty etc. You can give it a shiny object and receive something else from its vast vault of "treasure". In this computer game, you enter a room with a tiny creature and a bunch of objects lying around. You have to give the right object to receive what you want. There is no sense of backstory and of course, no indication what the creature may want, for that matter.

With such a bland skeleton of a game, there is hardly any fun to be had. Even if it is not fundamentally broken. Oh, wait, it is. Using the dragon artefacts at the very end, the game responds with a message about pirates falling off a bridge. Although that actually happened at the very beginning. The game is unfinishable and that is just the last, most fatal of many glaring bugs throughout. Though no worries – you're not missing anything.

P.S. The fan-made Plus/4 conversion claims to have fixed the bugs. Nevertheless, the question why one would want to play this game remains.