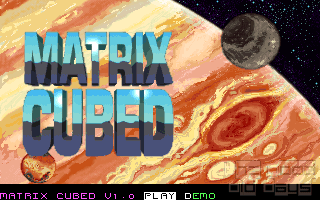 In Buck Rogers: Matrix Cubed, the venerable SSI Gold Box game engine is put through the paces in a space opera adventure in the Buck Rogers universe. In addition to familiar AD&D-based character creation and Gold Box adventuring, the game includes a skill system, story-based experience rewards, and attractive VGA graphics that are inexplicably shrunk to the same small viewport used since Pool of Radiance. A musical score is supported by Soundblaster or Roland hardware.

Characters can be created from six races (Terran, Martian, Venusian, Mercurian, Tinker, or Desert Runner) and five careers (Rocketjocks, Warriors, Engineers, Medics and Rogues). Some races have limited career options, and careers have associated skills, so Rocketjocks are better at piloting craft and Rogues are better at, well, rogue skills like opening locks, fast talking, and hiding. Characters can be transfered from the previous game, Countdown To Doomsday or made from scratch.

As with most Gold Box games, Matrix Cubed includes an “Adventurer's Journal,” here called the “Log Book,” which serves as both a companion to gameplay (certain points of the story will direct the player to read a passage from it) and a copy protection scheme. With a couple of exceptions, the entries in the log book are short snippets that could easily have been included in the game and generally lack the character of previous titles which might have included illustrations and “hand-drawn” maps.

The game boasts a playing time of “40-100 hours,” most of which is spent in combat scenarios. Fans of the tactical turn-based combat of the many predecessors using the Gold Box engine will enjoy this last gasp of the technology.

In addition to the classic first-person 3D view, Matrix Cubed features “overland” map travel for planetary surfaces and “solar” map travel between planets. Many locations are simple “menu towns” where services are selected from a list.

Contemporary reviews were not kind, criticizing the game's ending and slapdash design. This is one for completists.