A Computer Christmas
for PC (DOS) 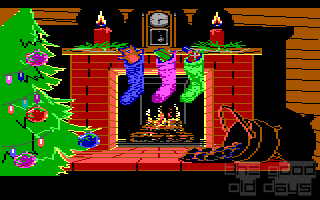 It is strange, but the thought that people used to write all of their Christmas cards by hand and send them via non-e mail seems really archaic. Yes, people who like their festive season nostalgic or simply love traditions still do it today, but most of our Christmas greetings take a different route now. Whether its email, text messaging or social media: Purely digital seems the way to go. Yet there was an even stranger time when there were hybrids, that is digital greetings send on physical media. Mostly they were created by big software companies for their employees and/or customers and they were as curious as they were innovative.

A Computer Christmas, the Sierra Christmas Greetsings Card from 1986, is a prime example from either a dark or golden age of video gaming. It just depends on which side of the love it or hate it camps of one of the most successful software companies from the mid-80ies you belong to. But whether the advent of sequels and style over substance kind of games was a curse or blessing, one thing Sierra was really good at in their heydays was customer relations. Which this little gem here shows.

Mainly with all the effort that went into their special Christmas cards. They are a series of Christmassy animations accompanied by electronic renditions of all time favourite Christmas tunes. Overall there are seven of them and back in the days they were of a rather high quality. Just to put it in perspective: King’s Quest, which used the same engine and was released only a couple of years earlier, earned quite some accolades for this style. And as far as artistic design was concerned Sierra certainly knew their craft.

Almost all of the scenes were originally created for this card – the only exception being a short sequence taken right out of Space Quest which admittedly is just some bland advertising too boot – and they are not just two frame endless cycles but (considering their age) rather lengthy scenes which are more detailed than most contemporary game’s cutscenes – some of them even try to tell small stories. There is a bit of variety too: From classically kitschy scenarios over pastoral panoramas to fun nonsense in the snow. Overall people got quite a nice little package.

That was then, but what about today? Well, these cards seem just as dated as hand written letters. The graphics are pixelated, the PC speaker is as as high-pitched and monophonic as ever. But, surprisingly that does not really harm the jolly mood they are trying to create! On the contrary: Since Christmas itself has some very nostalgic vibes to it, the retro charm makes these Christmas Greetings even more festive than they ever were. So, why do not you summon the Ghost of Christmas Past by booting these greetings from yesteryear up?