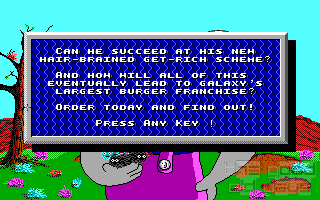 Looks and plays like an Apogee jump'n'run, but it grew from the mind of Frank Maddin, who programmed and designed the game mostly himself in his spare time. Only some time before its release in 1991, it became one of the early Apogee titles. So you might ask who actually copied from whom at this post-Commander-Keen time.

The first part The Trouble with Twibbles discussed here is shareware and the 2 successors are only available commercially. Graphically, there is colourful EGA throughout and the ears receive sound effects only from the PC speaker.

The story in accompanying text windows presents a little self-ironically the ambitions of the anti-hero Mylo Steamwitz to gain riches by mining crystals in the solar system of Altair. Because he wants to invest in the purchase of Twibbles: …those cute little cuddly toys that are the hottest thing in the galaxy as cuddly pets.

The 16 levels are accessible from a central cave. Each level has its own visual design and tries to set different priorities in gameplay: you have to avoid falling rocks and eliminate enemies; remove glass blocks so that the way back is also free; activate elevators to reach inaccessible places; deactivate permanently firing cannons to be able to walk the path in front of them; reverse gravity to reach remote switches.

Other game elements are differently coloured levers that open the corresponding doors. Airlocks, which, when fired upon accidentally, cause the player to explode in the vacuum created. And of course the standard obstacles, such as dripping water pipes, spikes from the ground and flames from metal tubes. The limited standard ammunition available can even eliminate previously invulnerable enemies with a “shot power-up”. Or the level is simply dark at the beginning: the player must first find the light switch.

Due to the uniqueness of the single levels, the demands also vary and the player has the choice to determine the sequence for playing the levels himself. To play through the levels you have to collect all crystals of each level and reach the exit. For this you have exactly 3 lives. If you use them up, the level starts again. After a completed level you can save your game at any time in the caves main menu. Long-term motivated players still have a lot of room to increase their score after playing through the level. Many levels contain a key that opens treasure chests. These are scattered along the optimal path through the level. To open all chests, you can march through the level a second time with the key. Or you can find hidden crystals that come out of blocks “mario-like” when you jump from below. The shooting of mushrooms is especially worthwhile, which then turn into one of the letters B, O, N, U or S.

Some levels are not only difficult, but also lead to dead ends if the strategy is wrong. But then you can simply restore. At the end of the first episode Mylo Steamwitz has to realize that the Twibbles have eaten up the whole planet and multiplied exorbitantly faster than expected. Due to the high supply, the demand decreases and the longed-for wealth moves again into the distance.

I enjoyed the 16 levels extraordinarily much. Because not only good reflexes, but also a certain amount of planning was required. This puzzle element and the varied design kept my motivation up. However, I must confess that I won't touch the game again for the purpose of highscore hunting. There I rather look out for the next two episodes. 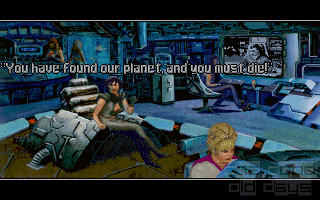