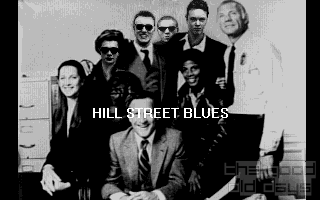 There are always these trends in TV programming. What used to be the big zombie wave some years ago, was the police procedurals back in the 1970s. Hill Street Blues was a fairly late arrival to this genre (running through most of the 1980s) and its computer game adaption appeared even only in the 1990s. So was it beating an already dead horse? At the time, probably, but seen from 2020 perspective, the difference between 1987 (when the series ended) and 1991 is almost neglibible for sure.

The game puts the clear focus on the procedural aspect as well. Specifically, most of the time is spent on officer dispatch: based on crime reports coming in through radio, it is the player's task to allocate people from the available pool, deciding whether they should take a car, walk etc. Quick reaction is often crucial, as suspects will escape for sure otherwise. If the crime is sufficiently severe, roadblocks may be used as well. Identifying a suspect (based on the initial description received), they can be arrested straight away or trailed for further surveillance. After all, what good is an arrest if you have to set the suspect free again immediately due to lack of evidence? 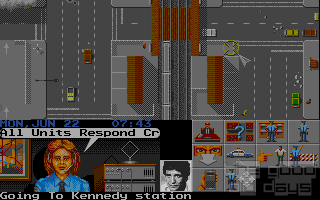 Difficulty comes from many things happening all at the same time. In fact, there are always too many things happening in parallel to properly take care of them all. Ignoring a minor crime is actually a viable option if there are bigger fish to catch, but this only works so far, as wrongdoers tend to escalate: criminals who don't feel prosecuted at all will repeat their crimes, or worse. Typical crime & punishment view on society there.

The underlying simulation of the city life is where the game scores. There are not only criminals lurking somewhere around the scenes of crime, but plenty of innocent passers-by minding their normal business. The day and night cycle is not just a graphical effect, but also leads to traffic congestion at peak hours etc. Last, but not least, the city layout is somewhat believable and there are many points of interest found on the map.

Issues arise in the amount of micromanagement. Although the interface works reasonably well to a degree, some comfort functions are painfully missed. For example, why isn't it possible to jump directly from the crime report to the spot on the map where it occured? Instead, the name of the hotspot needs to be manually searched every time, leading to a particularly steep learning curve for newcomers. Also, the officers' autonomy leaves a lot to be desired. Sending them to the scene of the crime and giving them rough, general orders is not sufficient. Instead, their every step needs to be controlled by hand. People walking around need to be looked at one by one to compare their faces to the description received, which becomes rather fiddly given that everything and everyone is moving. All that while other crimes may also require your attention. 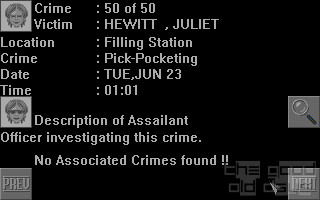 The good thing about it is that the game indeed does not require perfect performance. Partial failure is conceptually intended. The stress of handling many concurrent events is certainly of the positive kind. The interface clunkiness, on the other hand, leads to failure for the wrong reasons. A mechanical issue which can be partially mitigated through training, but never becomes as comfortable as it should be.

Almost needless to say (?) that the game focuses completely on mechanical aspects, such as dispatch, trailing, arresting etc. The few digitized pictures of the TV cast do not lead to strong (or any) characterisations, no personal drama or other “soapy” elements within the game. Officers don't even take vacation or become ill. For sure, the fundamental concept of an “interactive police procedural” could have offered a magnitude of additional activities or at least factors to consider.

Meaning considering what could have been, Hill Street Blues is a rather dry and limited affair. Nevertheless, what is there is indeed the core of what such a game should be, and that part isn't badly done at all. Maybe the time is right for a rediscovery of this widely forgotten game?

Mr Creosote (2020-04-29):
Originally posted by beranmuden at 08:47 on April 29th, 2020:
Tried replaying it about a year ago, but sadly it didn't quite hold up in the tooth of time...
Indeed, one I remembered enjoying much more than I did this time around. It happens quite often that a game's own ambition and conceptual promise imprints itself on my memory more strongly than the actual execution. It's the big risk of nostalgia

Nice seeying this one pop up, really enjoyed it back in the days.
Tried replaying it about a year ago, but sadly it didn't quite hold up in the tooth of time...