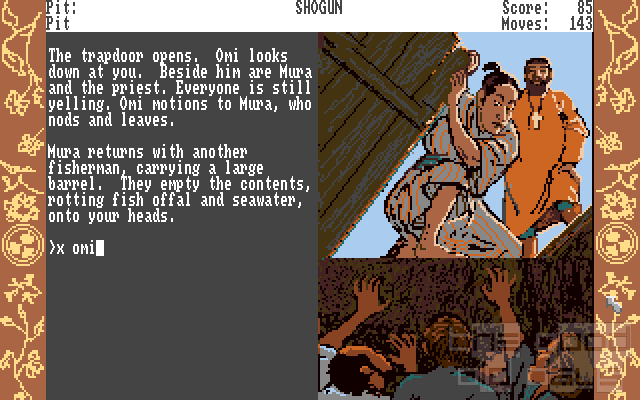 Unless you look into the details of how this game came to be. By the late 1980s, Infocom had ceased to be the independent, stellar company they had been at the time of making Hitchhiker. Parent company Mediagenic (Activision) had acquired this licence without even consulting them. And unlike Douglas Adams before, James Clavell showed no interest in actual collaboration on the game. So Infocom veteran Dave Lebling, who had shown he really still had it with the excellent original creation The Lurking Horror, took an approach which was probably the best one imaginable given the size and complexity of the source material coupled with the lack of external guidance: he made Shogun an episodic, sort of “highlights from the novel” game. 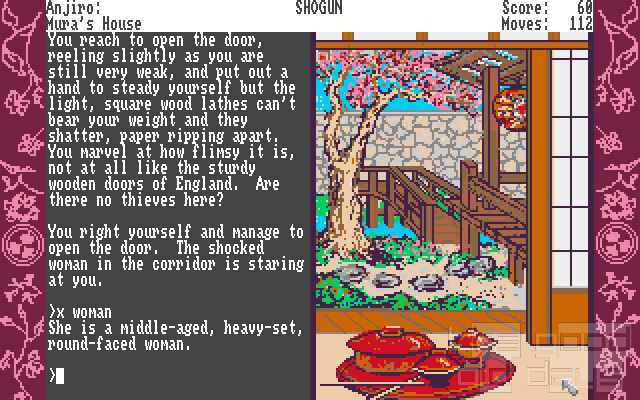 Worse, the translation into this interactive medium fails to a significant degree. Although the amount of actions understood by the parser remains on an impressively high standard, this understanding is not really applied to any end. Too many of the scenes can only be called pseudo-interactive at best. Often, there is another character telling the player exactly what to do… and guess what, this is not a tricky puzzle, for example to pretend to follow orders while actually working around them – the correct solution is to just follow the orders. Attempts to diverge resulting in swift death or the dreaded “this scene is no longer winnable” message (effectively the same as death).

The overarching theme present in most scenes, being mostly helpless in a completely alien society whose rules one is unfamiliar with and where an incomprehensible language is spoken, makes up for some pitfalls. Same for the occasional graphical illustrations, nicely drawn even if not up to the best standards of the time. Infocom chose another way of integrating them than the main competition: instead of permanently displaying graphics in a sort of “frame”, they are scrolled along with the old text. This allows for more screen estate to display text once the player has seen and appreciated the pictures. Unlike in Zork Zero, however, the graphics do not fulfil any gameplay purpose (with one exception). 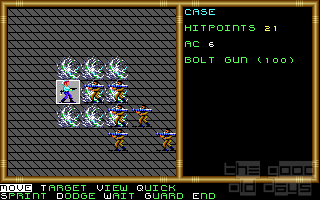