Supreme Warrior
for 3DO 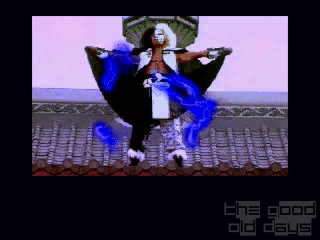 A bad, bad warlord wreaks havoc in a 16th century Chinese village. He wants the second half of a mystic mask, ownership of which promises ultimate power. The battle monks prove no match for his minions. While the ultimatum to hand over the hidden mask is running, all hope now lies with a single fighter: the player. Because, you see, evil warlords and their generals are all incredibly vain. Instead of just ordering their dozens of armed and able soldiers to kill that one guy approaching, they let themselves be challenged in one-on-one brawls. Which the player can then win one after another – each victory making him stronger, because each opponent possesses a special power which can be taken from them.

So far, so good. Supreme Warrior puts a “full motion video” spin to the age-old fighting game genre. The introductory clip wets the player's appetite immediately: action-packed fighting all around, flames burning, evil guys in silly costumes wearing stupid masks spouting nonsensical threats… not too bad! Real sets (reused from actual martial arts films) can be seen, giving the whole thing a genre appropriate quality feeling. Acting isn't bad either. Video quality isn't quite up to the expectations. Strong compression artifacts are strikingly visible all over the screen. The only excuse being that in the later heat of action, they are not so noticeable anymore, as the player has to pay attention to other things. 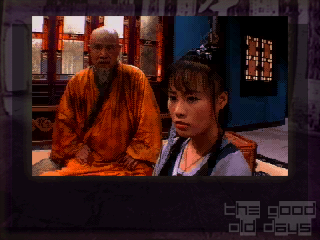 Gameplay, on the other hand, is just hideously bad. The fighting being performed in first person view (no real other way given the graphical nature), you see your opponent doing his or her moves and you are supposed to react appropriately. I.e. block, throw a high punch or a low kick at the right time. Since just from the opponent's movement alone, it is virtually impossible to tell what the “right” reaction would be, teeny-tiny icons appear for a split second to indicate which move to perform right now. Failure to execute this correct reaction move immediately results in taking a hit, throwing you off-balance for a looong moment and putting the opponent out of view while he/she already prepares for the next attack. So that stopping the next attack will be even harder.

Boiling it down, this makes Supreme Warrior a reaction game akin to Dragon's Lair or Mad Dog McCree. In the fighting game genre, similar attempts had been witnessed on other consoles before, with varying success. Putting the question of whether this conceptually offers sufficient “interactivity” aside for a moment (I'll get to that later), the issue is really with playability, i.e. feasibility of the challenge.

The size of the icons makes them hard to spot and to distinguish. Quite often, they are gone before you will have identified whether this one showed a hand of a foot, for example. Apart from the picture on them, the only distinguishing factor is their placement on the screen. Spatial recognition to trigger intuitive action isn't a bad concept, but in this case, it makes matters even worse: coupled with short duration and lacking size, you will just miss too many icons completely. Different shapes or different colours all could have helped, but no such luck. On top, the variety of different moves isn't aligned to the available system controller. Each button is overloaded with two or three moves, in combination with directional pad activity. “Just” pressing the right button quickly may have been feasible for very good players, but coordinated actions of two hands complexifies the task immensely. The only way to win is really learning each opponent's order of action by heart so that you don't even need to see those icons anymore. 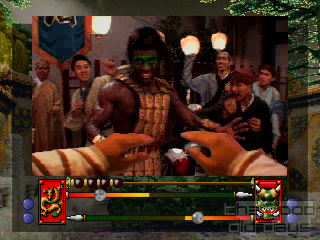 Coming back to the question of basic interactivity, the technical format robs the player of many completely logical action possibilities. Indeed, the only thing you can do is watch and react, then repeat until one goes down. There is no way for the player to take any initiative in the fight. If you manage to score a hit by pure luck (which makes the video jump absurdly each time, as not every possible course of action has been filmed), you cannot follow up while your opponent staggers around. No, you have to let him/her recover and prepare for his/her own next move, in order to then react again. Goodbye, combo moves.

So overall, Supreme Warrior is both conceptually flawed, offering too little interaction, but also, what little gameplay there is, is unplayable for all practical intents and purposes. One for the bin. 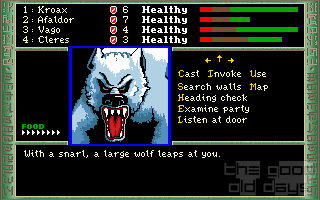