Sword of Destiny
for Plus/4 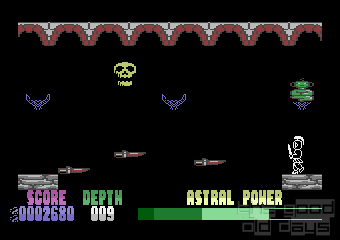 Back in the Eighties, Sword Of Destiny was one of the first computer games I played. After putting the cassette into the slightly damaged drive, you had to push down the play button and the cap all the time to avoid a crash during the process of loading. The longer the screen glimmered like a rainbow gone mad, the more the excitement grew. Finally it began: Down into the catacombs!

As mostly on the Plus/4, a story is completely missing. Everything you see at first is a transparent, white framed shape, presumably a noble knight. He holds a sword in his hands, which turns out to be a fire arm after pushing the joystick button. It can be used to scare away the randomly attacking ghosts, whose touch gnaws at your energy bar (“Astral Power”). If this bar sinks down to zero, the game is over abortively. In order to avoid this case, you have to walk and jump through the catacombs as dexterous as possible, and refill the power by hitting the ghosts. Therewith, you and the ghosts find yourselves within a fateful, quasi christian relationship of giving and taking, which is fulfilled wordless by both sides.

Although the own jumping power is very high already, it is boosted by means of petrified (!) trampolines often. Using them, you are able to traverse several screens at once, and reach some places at all. In the opposite direction, i.e. falling, you stand toppling through numerous floors without any damage. Down there, you have to be on the alert, as your power takes damage faster the deeper you are situated. Furthermore, you have to collect glittering chalices/vases/crosses, which open walls, providing a free way to glory therewith.

Glory, however, is limited strictly. Having reached the end of the level, which is quite short and hard anyway, a brittle “Congratulations” awaits you. Afterwards, the same level including the same monsters starts again - the only difference is that they are damaging your energy faster than before, so than you won't survive very long.

Looking back, it is good that I didn't make it to end back then. Definitely, I would have been disappointed to a high degree of such a boring “end” of a good game!

Tapuak:
Feel free to share anything about Sword of Destiny (1985) here!
[Reply] 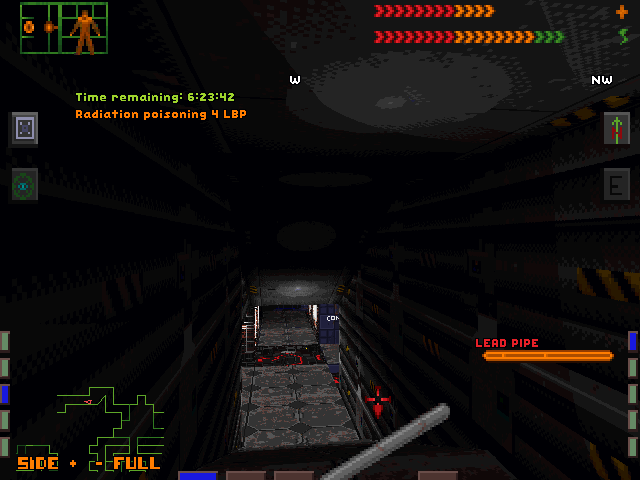