The Sims
for PC (Windows) 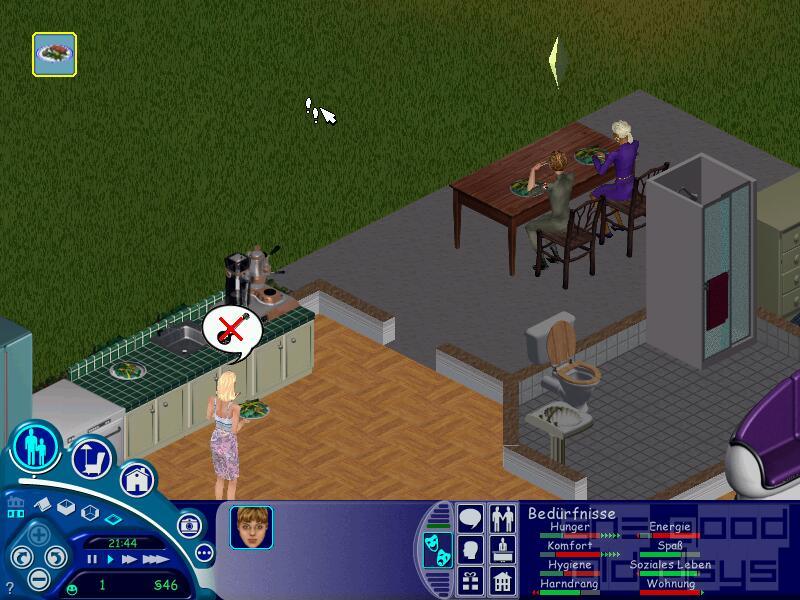 What Sim games do you actually remember? Sure, we all know it was a big, diverse series throughout the 1980s and 1990s, but seriously: which ones do you remember? Maybe just the titles? Yes, thought so. After the initial mega success of Sim City, Maxis really ran into quality issues. None of the countless games they pushed out really struck a nerve with general audiences. Some became popular in small hardcore niches, but were just to clunky for mass appeal. Others were just too simplistic to be taken seriously. Apart from the safe Sim City 2000, the output of the 1990s was overall forgettable and in the second half of the decade, releases slowed down significantly. Just for designer Will Wright to have a triumphant comeback with this game, which quickly became the best-selling one of all time (at the time) and turned into a huge cash cow with its countless expansions. How did this happen?

The Sims transcended established genre limits. It offered an experience which – although not completely unheard of – appealed to an audience way beyond of what was commonly considered computer gamers. Qualities which, if you consult contemporary coverage, you may not even hear of, because professional reviewers at the time of course tried to hold it by established standards.

What they found, in their playing time under time pressure to get the review done, was a role-playing like appeal. "Level-up" your character (gain promotions at work) and improve your gear. What was the extra-deadly enchanted axe in Diablo seemed to be the larger TV or leather couch in The Sims. Indeed, this is a mechanic which is strongly at work in the game and it does draw players in initially. 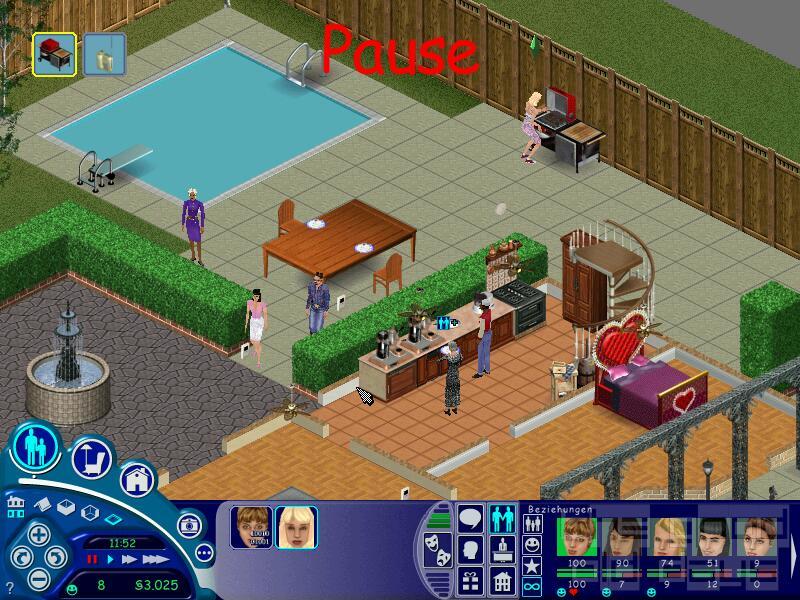 While it can be played as such an optimization game (making money quickly and revel in materialist delights), those who understood it to be only this likely lost interest after some days or weeks, because it's not hard to "master" based on this understanding. Therefore, it could be considered even boring. A sentiment which can be found in a number of contemporary and even more recent coverage pieces. A valid view, but based on what could be considered a fundamental misunderstanding or ignorance of what's really going on in the game below the hood.

Which is nothing less than a soap opera or sitcom with and endless stream of episodes within a goldfish glass. Optimizers usually only play one avatar, this being the most effective way to progress quickly on career and money by means of micromanaging this person. As soon as a group of people moves into the house, things take turn into quite a different direction, however. Social relations are suddenly in the centre of everything, and in a much less controlled way than those of a single avatar.

Honestly speaking, the juicy details of these social aspects in The Sims take place in the players fertile mind to a large degree. Though the game manages to feed the imagination to just the right degree to let it run wild.

As an anecdote to illustrate, let me tell you the story of a former staff member of this site. Discussing about this game between us, he voiced his dislike of it. One thing he held against it: the inability to really control the avatar's personality and actions. He claimed his Sim had always tried to have sex with the housemaid. Whoops… this cannot even happen in the game, as the housemaid is not modelled as an actual human being who can be interacted with at all. It's just a lifeless sprite blocking ways. It had been all in his mind. This is the power of The Sims – it works even on those who dislike it. Or think they dislike it.

What is it that lets the players' imaginations run wild like this? It must be related to the level of realism versus abstraction which the game takes. Characters as well as surroundings look reasonably "realistic", but not actually life-like. People are not digitized actors, but look like plastic dolls, though just detailed enough to project individualism. 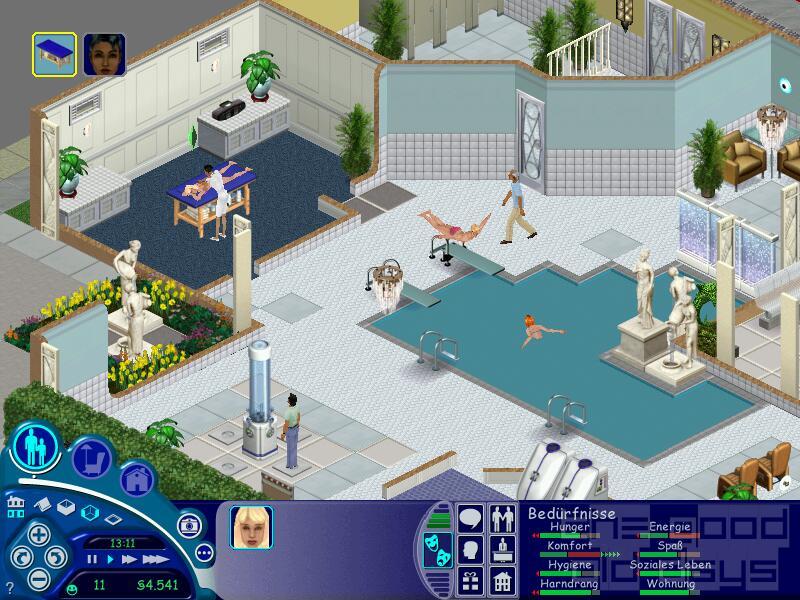 "Just enough" also being the key point when it comes to any actions and interactions. You can hardly ever tell what a Sim is really cooking in her kitchen, but the activity of cooking is quite visible. If a fire breaks out, the player could have this moment of "oh, typical, will she ever learn?" Or, if all goes well and the guests enjoy the snacks just prepared, one could feel some pride in the vegan masterpiece. Not that you can cook vegan (or make any ingredient selection for that matter), but you can imagine.

Social interactions again work pretty much on the same level. You can't really tell what two Sims are talking about with just gibberish coming from the speakers. Small icons signify a general topic from time to time. Body language shows another person's reaction to this topic or other advances.

With base emotions and needs simulated, the game leaves a lot of projection space to its players. Sure, the game will enforce a certain feeding of each character's hunger clock, though in what way and to what degree is totally up to the player. Why not put a Sim on a diet? Keeping him on the edge of a barely acceptable hunger level the whole time. How far can you push it? Even social life may be affected, as he may get cranky in his interactions with other people. None of this will have any visible effect, as Sims will never change body, nor will they ever age (the sole exception being babies turning into children after few days), but the point is: you make up your own story and games within the framework provided by the game.

Watching a sitcom on TV, even if it is a long-running one, the amount of stories it will tell is strictly limited and also spoon-fed to its viewers. It may have… say… 208 episodes, for instance. Which, given a normal distribution of A and B plot, could send it up to a whopping 500 small stories, counting some overarching ones. Not bad, but nowhere near what you can experience in The Sims. 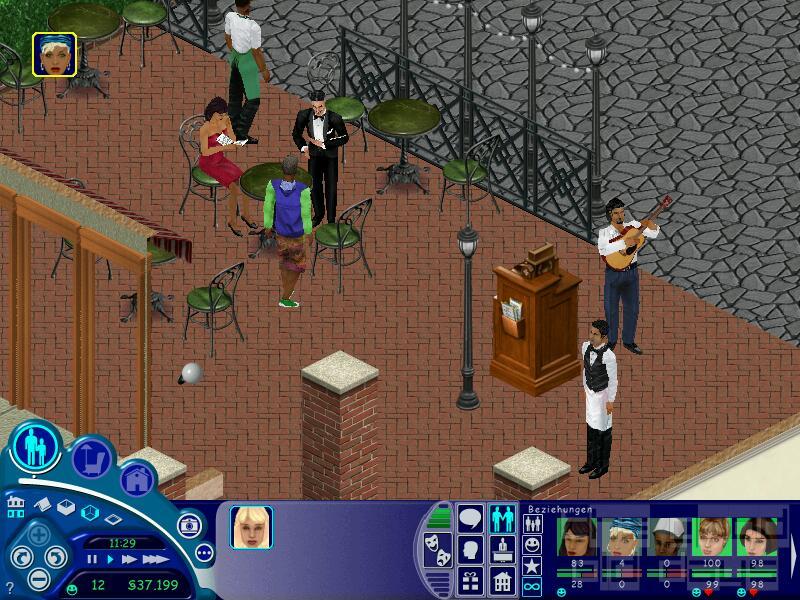 Yes, long before two sitcom characters in a romantic relationship could discuss, for example, the impact on said relationship of one being present while the other goes to the toilet, the very same situation could be played out in this game. Even with vastly different outcomes, whereas in the sitcom, it will be a part of a single episode ending in exactly one way. A kiss between two people potentially being misinterpreted and leading to jealousy – an archetype trigger of social dynamite, and therefore a mainstay in sitcoms. Many ways this could play out, aren't there? So let's play it out!

You may now argue that the Sim personality types are too limited and therefore the potential for such different turns of events is actually too small. It is true, of course, the simulation has its limits. Staying on the subject of romantic relationships, for example, while homosexual ones are possible, jealousy, on the other hand, cannot be avoided in Sim relationships. Though it is a bit like pointing out gameplay related flaws, such as the weird time system where some simple actions (such as getting up from bed or going to the toilet) take a disproportionate amount of time, or the sometimes failing pathfinding routine. You'd be right on all counts, though again, sorry to say, you would be missing the point of the foundation being "just sufficient" to fuel imagination and let it run wild without imposing too many details.

Finally, of course, no review would be complete without spending some more words about the expansions. The first one fell into the obvious area of providing more objects, i.e. it appealed to the hunter/gatherer crowd. The subsequent ones, however, attempted to strengthen said social aspects. Unfortunately, although they aim at the right thing, most are not particularly successful in what they do.

This is because most rely on a mechanic which just doesn't fit into the main game flow organically. The core of the game is the "live" simulation of what's going on inside one virtual doll house. When its inhabitants are then suddenly able to go on vacation or to a downtown restaurant, the designers couldn't think of a better way than freezing the state of everything inside the house, fading to black and then let some new surroundings play out temporarily, with their own, independent timeline. Sims in this new place still use up their energy, they use money from the same global account and they can meet other characters which definitely could not possibly be there at the time, but when they return home, no second has passed – but their character values have changed according to the time actually spent somewhere else in the meantime.

Meaning those outings are neither fish nor fowl. The stringent clarity of the original simulation is disturbed rather than extended. Sure, visiting a store or going for a romantic dinner at a restaurant are nice features in principle, though they shouldn't take place out of the main world. Just then, there would have to be some concept of supervising a much larger overall area. Difficult in gameplay terms. Hence these awkward crutches. Nevertheless, don't discard those expansion packs completely, because many also extend the variety of interactions, regardless of places. Which of course pay directly into the base game's may draw again.