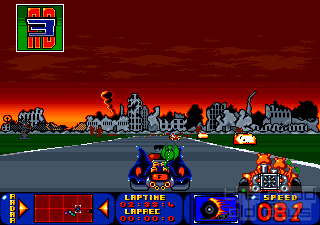 The demo version of Bump 'n' Burn was really something. Instant fun, racing along in crisp, colourful cartoon graphics… this must be a hit! Oh well… lesson learned: some games are particularly suitable for (short) demo format. 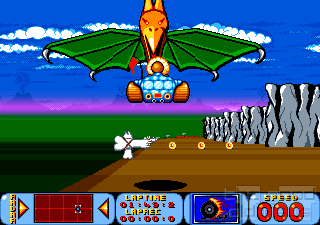 Hey, put me down!

At first glance, the game indeed does everything right. The drivers and cars are clearly distinguishable, thematically distinct and sort of funny in a childish way. The rubber band keeps cars closely together so that weapons and other extras (appearing on the roads to be picked up) can be used to good effects at all times. Courses have lots of character, ranging from basic grasslands and forests to post-apocalyptic cities. The races become even more action-packed due to interfering monsters/apparitions, picking up cars until they manage to wiggle free.

Though then, after practicing and finally winning some races, a number of the same features turn into annoyances. The courses have character, but no recognition factor. They wind here and there, but in ways which may as well be random. Each also goes on too long. This insight comes when you realise that the rubber band is actually too strong in this one. So strong that it's totally impossible to ever gain any significant lead on the rest of the field. Which makes the first 90% of each race insignificant for its outcome. The same realisation also takes the punch out of the otherwise fun weapons, because why try and harm the computer drivers when they will "magically" catch up again instantly anyway? Turning all the extras into a more or less pure multiplayer feature (two players maximum on split screen). 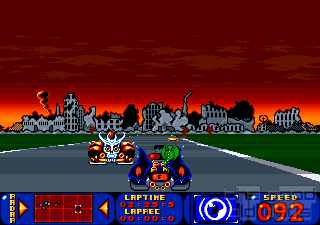 I'll get you, Count Chaos!

Graphics, while essentially good, also have one issue. Speed is good, even on a standard A500, the game runs fluidly. Though it never slows down. Speedup and braking only occur on the speedometer, remaining virtually indiscernible as far as driving experience is concerned.

Last, but not least, what broke the game for me, is the double victory condition. To move on, players have to reach at least third place in each race. On top, however, there is also an absolute timer per lap running. If it times out during the race, the race (and one continue) is lost, regardless of position in the field. What's the point here? Either restrict me on placement or have me race against the clock, but not both – that's simply annoying!

Yes, there is some fun to be had with Bump 'n' Burn. It's a reasonably good production, but it doesn't last. Maybe a little longer if you have a second player available.