BC Racers
for Mega Drive (Mega-CD) 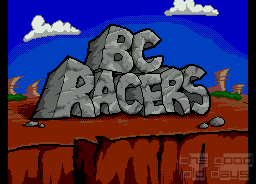 The two Chuck Rock games having been minor hits, the ground rule of Jump'n'Run heroes applied and with with the Flintstones movie just around the corner, Core Design churned out a “fun racer” based on this theme. Had the world been waiting for this? For sure, nobody had held their breath. 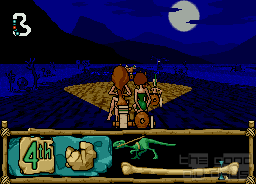 Colourful, cartoony graphics welcome those who dive in nevertheless. Differently themed tracks offer some visual variety (the variety staying on visual level, though). Similarly, the driver duos are clearly distinct in a Flintstones-like caricature fashion. The prehistoric motorcycles (with side cars) are propelled by some invisible dinosaur motors, bound to overheat, and also the complete structure may break in case of too many bumps.

Taking further queues from the genre competition, the co-drivers receive an actual function insofar that they can kick or punch the opponents. This is also where the rather unusual cooperative two-player mode comes in, one player driving as usual, the other taking over the fighting part. 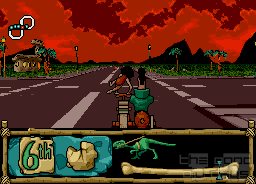 Though honestly, the second player will not have a great time with this rather limited role. Single players will realize after about 30 minutes that such a comrade-in-arms can be losslessly replaced by simply keeping the appropriate button on the gamepad pressed the whole time. That is because constant punching or kicking comes at no real costs and targetted fighting is rather impossible anyway due to lack of a rear mirror to see other drivers approaching.

At this point, you may be asking yourself: why the focus on such tiny little details? It's because BC Racers is a serviceable, but forgettable experience. It's all so barebones that there is hardly anything noteworthy to be found inside. The (relatively speaking) best feature being the rather challenging track layout on harder difficulty levels. Under the thematic and graphical cover, it overall plays exactly like all the other mediocre Mario Kart imitations of the time, and the one thing it does attempt to do differently (multiplayer) fails both conceptually and in implementation. 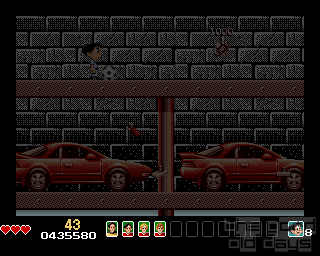