Wizardry: The Return of Werdna - The Fourth Scenario
for Apple II 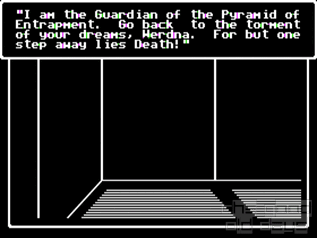 Wizardry followed the marketing scheme of D&D very closely originally. Parts 2 and 3, although sold as standalone games at regular price, were only playable for veterans of the first one, as they contained no character generation, but only allowed importing victorious heroes. Only owners of the base set were allowed in. After a prolonged break, one could imagine that Sir-Tech may have gone soft and allowed new players a chance at entering this world… unless the big red warnings prominently placed on the box were to be taken seriously, of course.

Characters don't have to be imported, but you cannot create new ones either. The Return of Werdna turns all original: it's not the expected re-hash to defeat the first game's baddie again, but you take over his role. Sleeping deep within his dungeon, he wants revenge. Following his defeat, he has lost a considerable part of his powers. Thankfully, the ten levels (climbed upwards) are equipped with filling stations for magic which gradually restore him to his former glory. 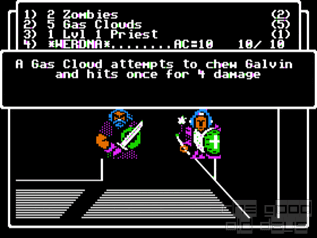 Werdna, a mage, remains the only playable character throughout the game. He can summon various monsters to help, but in fights, they act autonomously. Enemies are recruited from character classes of typical heroic parties.

This reversal of the typical scenario isn't just for show. You could think they just renamed a couple of things and bam, there is your evildoer's RPG. Though actually, they are still using the unchanged and non-adapted system from the first part. This makes part 4 particularly interesting insofar that typically, a roleplaying system is balanced towards one perspective only – that of putting the heroes in the protagonist role.

It works out quite well as far as fights are concerned. They are sometimes hard, but largely manageable given some considered choice of summoned allies. Some heroes special abilities turn rather nasty, however. Ninjas and especially thieves quickly become annoying, at least until the game finally shows mercy after some levels and gives the player a countermeasure against pickpocketing. If an object essential for winning is lost, that's it. On top of that, the bulk of the objects dropped by defeated enemies is simply useless, because Werdna, being a mage, cannot use those weapons and armour. The allies equipment cannot be controlled anyway. 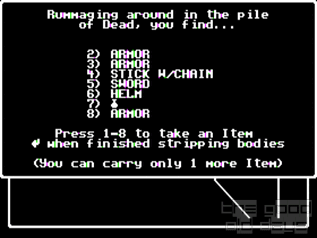 The biggest departure from the previous game design, however, is in the character development model itself. Werdna is already a powerful mage, just stripped off most of his abilities. He receives no (!) experience points from fighting. Instead, he “levels up” at pre-defined places in the dungeon, marked by pentagrams. This actually solves two of the most annoying structural deficiencies of the genre in general and of Wizardry specifically.

First, it eliminates the need of arduous grinding, which after all was the basis of the first three games. Instead, it is rather advantageous to sneak through to the key points of the levels while avoiding as many enemies as possible. This is important also because Trebor's ghost (the quest giver of the first game) is always hot on the player's heels and if he ever catches up, it's instant game over. This therefore is a particularly draconian variation of the food clock in Rogue: the player is doomed to always move forward.

Second, the player is not forced to take decisions how to develop his character. This may sound quite negative at first glance, but it avoids the issue of uninformed long-term decisions. Which skill is worth further developing? Typically, you will only learn this hours later. Werdnas development is pre-determined, avoiding otherwise inevitable frustration. 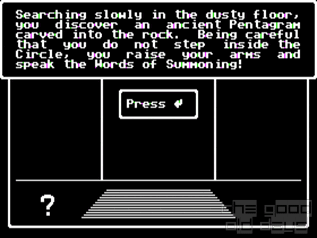 So actually sounds like a rather good game, doesn't it? These positive game design sides to Wizardry 4 are (if the game is mentioned at all, which happens rather rarely) all too often overlooked. This is unfair, but there is a good reason for it, because “frustration” is indeed the most defining term.

The devil is in the level design. The stated design goal was to make a game for expert players. This shows in an unusual abundance of puzzles and riddles. Still alright, even if some of the solutions turn rather obscure. Many players reportedly never made it out of the first room. There is no hint about there being a secret door or where it could be located. Werdna's mage class even prevents him from casting the necessary priest spell, but honestly this is not the main issue; once you have the idea, the steps towards the solution are discernible. Though you simply don't know what you are even looking for. In later levels, the game even goes full meta when one essential hint can only be read from the maps manually (and hopefully correctly) drawn by the player.

Meaning it is all very hard, but still reasonably fair. This fairness is lost in those levels which simply don't follow any comprehensible logic anymore, but can only be solved by brute force trial & error. Level 8 (remember, you climb up, therefore it is the third) consists almost exclusively of invisible explosion traps. The only way to proceed is dying, dying and dying while every fourth step may actually move you to an untrapped square. If you make it through, an abundance of spinners is waiting in level 6. The bane of every uninspired dungeon crawler, used to a frequency which is simply annoying. Level 4 contains countless one-way connections, spinning rooms and even rooms without exits (not even secret doors!). And then, the final levels are actually a sort of three-dimensional hyperspace. Good luck mapping that on your two-dimensional paper.

Extrinsically, Wizardry 4 didn't exactly shine, either. Even though no veteran heroes are needed from earlier games, you do need the first game's manual. Otherwise, where would you learn how to manage the free text input for spells? For sure not in the manual of this game. Likewise, towards the end of the game, you will need a password which you can only have learned in the first game. If you could even remember it six years later. 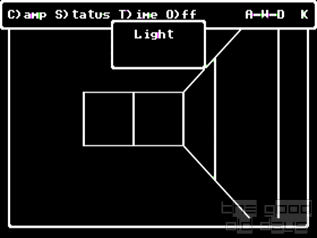 Wait, free text input? That's right, this game from 1987 is still based on the same technical foundation of 1981. Where The Bard's Tale, after all an almost identical copy of Wizardry, had already shown in the mid-80s what was possible graphically and for a more modern interface, Werdna was still stumbling through dungeons shown as wireframe. He handled things through sterile text lists and fought dowdy enemies. Behind the scenes, an archaic save function only remembered the player state, but the dungeon was reset to initial defaults (including already killed enemies). It was actually slated for a 1984 release, but significantly delayed due to unknown reasons. This was hardly adequate anymore at the time.

The biggest pity surrounding it is nevertheless the design mistake to enable difficulty through unfair means. Catering to an expert audience is a rather brave step commercially anyway, because market potential shrinks with accessibility. Though when solving a puzzle (or another issue), the player reaction should really always be: “Of course, why didn't I think of this earlier?” Never: “How on earth was I supposed to know that?” Wizardry 4 gets burned on level design, because it plays with fire in the latter sense.

It is rather tragic that all the components were considered burned afterwards. The really good ideas discussed earlier were just as dead as the abyssal lows. Part 5, actually ready before this one, put everything back to square one, focussing on grinding and player-controlled character development. Part 6 made the leap into the present technically, but gameplay experiments were avoided. Part 4, if it is ever mentioned at all these days, is always reduced to its high difficulty level – without reflecting in what way it is hard. Truly tragic.

LostInSpace:
Oh yes, those spinners are terrible! Truely uninspired game design. But on the other hand: what to do with a bunch of white lines on a black background.
[Reply] 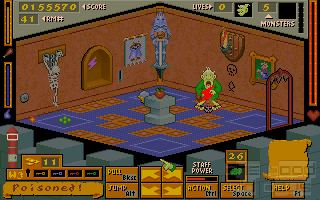