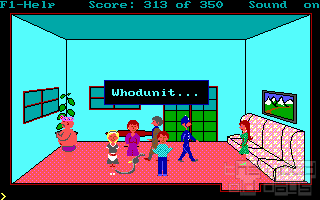 Somehow, Hugo's House of Horrors had become a cult favourite. Instead of the obvious, author David Gray switched genres and went for a British country house murder mystery, while retaining the humorous distance to his own material which already made the first sort of playable (look forward to a second meeting with the riddling old man). 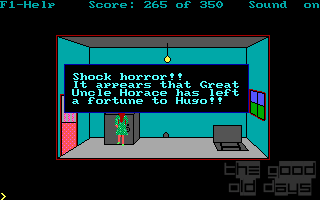 Uncle Horace seems to be a really nice guy. He even lets his niece Penelope and her boyfriend Hugo share a room. Hugo's looking forward to that, though after ogling the “saucy-looking French maid” a little too intensely, Penelope uses the old headache excuse, leaving Hugo to… disappear. Oh, and Uncle Horace has apparently been stabbed. Time for Penelope to investigate!

Addressing one major mechanical issue of the predecessor a general LOOK command now provides a rather useful room description, including a list of relevant, movable objects. Apart from that, it's the same system all over again, up to sprites and background graphics being re-used. The reason there is a dog in this game is simply this, don't be fooled.

The second Hugo/Penelope game makes a clear attempt to increase play time, but unfortunately, it takes the laziest availble route to achieve this. The presence of a large hedge maze not even being the main offense, but rather leaving the player completely in the dark with respect to what to look for in there. Adding insult to injury, bad vibes occur when (*choke*) trying to cross a bridge. 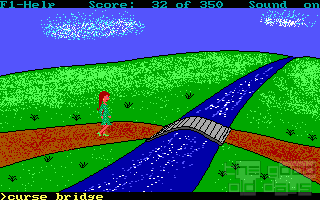 Yes, it's all manageable by exploiting a game mechanic. Though the thing is: in real life, this wouldn't even be a danger. Everyone can walk across a regular bridge. It just turns dangerous in the game due to the illogical mixing of perspective and collision detection. And where the first King's Quest at least had the decency to have the moat monster eat the player instantly if he didn't manage the curve of the similar bridge correctly, this game lets its victim play on almost until the end only to then realize all had been lost for a long time. In a similar vein, the game later expects the player to cross a chasm using a path invisible to the player, but it should be in plain view of the protagonist. Truly puzzle design at its worst.

This turns reaching the ending quite a chore. Plot-wise, there is nothing to be missed there, as the solution turns the whole things into a rather lame twist, robbing Penelope of the opportunity to truly turn the tables and actually rescue Hugo. Though ironically, after wading through all this random crap, the endgame suddenly contains two only thematically appropriate and at least somewhat nice puzzles when clues for murder motives have to be gained by distracting other characters.

It doesn't nearly make up for what came before. Nevertheless, it gives a glimpse of what could have been: a nice little game poking some obvious, harmless fun at this beloved genre. Nowhere near masterpiece status, but “short fun and forgettable” would have been a better status than “endlessly frustrating”. 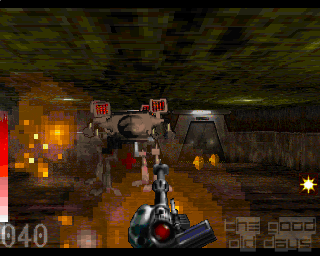