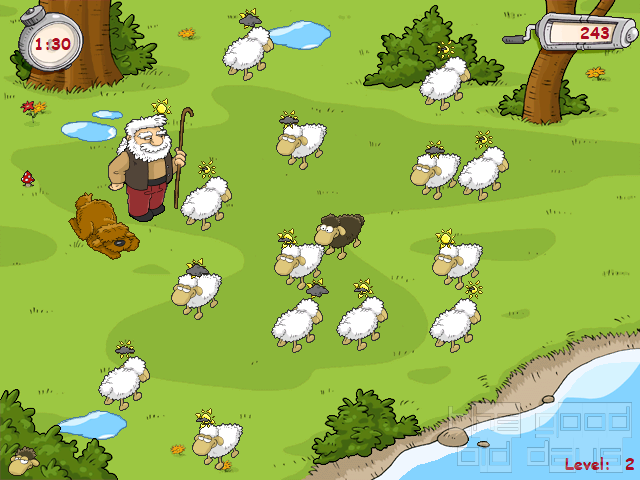 Even in a very early title for the C64 like Impossible Mission, the player's main task was not simply to shoot down enemies. No, the agent had to avoid the rushing robots on his way to some computer terminals inside a room and finally scan them for a short period of time. During this phase, the player was immobilised and could no longer actively dodge the attacks of the patrolling robots. The timing of the scanning process was therefore critical and had to be planned in advance by precisely calculate the movement of the chasers.

By copying this game concept, Sven Bømwøllen etched not only into the collective memory of the German gamer scene. Even the mainstream press suddenly gave attention to this marginal topic. Not the old-fashioned basic idea of gameplay but the way it was presented apparently hit the zeitgeist of the newly dawning millennium back then. The part of the hunting robots is handed over to a sheepdog guarding a flock of sheep. But the player's task is not to steal the sheep. No, far from it. The player controls a male sheep called Sven as he performs copulations within an otherwise female flock.

The space bar has to be pushed frequently while docking at a sheep in order to let it explode in a cloud of bliss. By kicking some sheep to 7th heaven in this manner in a very short amount of time, he even gets a temporary halo and an accelerated movement. To complete the analogy to the Christian mindscape, an old indulgent shepherd is of course not to be missed. He runs after Sven much more slowly than his herding dog and guides it with whistles.

He tries to keep up the morale of his flock, but ironically the sheep rely on Sven's active help to maintain their good mood. If their well-being drops too dramatically due to lack of uplifting gymnastics exercises, they turn into lightning-throwing little devils. Thus, Sven is pursued in many ways on the isometrically depicted playing field and he has no other chance as to resort to the power of psychoactive mushrooms. These can accelerate his sneaky gait, increase his potency, lighten the mood of the whole herd or can have the opposite effect (depending on the colour of the mushrooms).

Additionally, a tractor beam of a passing UFO appears occasionally and tries to lift up a sheep and takes some of the work off his hands. Should Sven happen to run into the beam himself, he comes back as an alien sheep. Last but not least, the mermaid sheep should be mentioned, which occasionally rises from the shores at the bottom of the screen and entices with extra points if Sven successfully mounts her.

To escape the chasers, a jump into the puddles at the corners of the screen is very helpful. These are kind of teleporters which move Sven immediately to a safer spot on the screen. But beware: points are deducted for this action. After losing the last of the 3 initial lives, an entry in the high score list is possible.

To climb up the list, a maximum of 20 levels may be played in the full version. In all of them the background remains unchanged and the AI of the opponents is also not increasing. Variety is only created by the presentation of new positions during lovemaking, the intervention of aliens mentioned above in later levels and the funny option to mount the dog Wotan. Sound effects accompany the action in many different ways. A scenery of sheep bleating, dog barking, moaning and groaning and various arcade sounds makes a background music obsolete.

A so-called boss-button completes the casual game feeling: By using this special key, the PC is becoming completely calm again and an innocent (fake) Word file appears on the screen. Despite its sexually-themed content, the game has been released for kids 12 years or older. The cartoonish graphics admittedly seem more exhilarating than arousing. 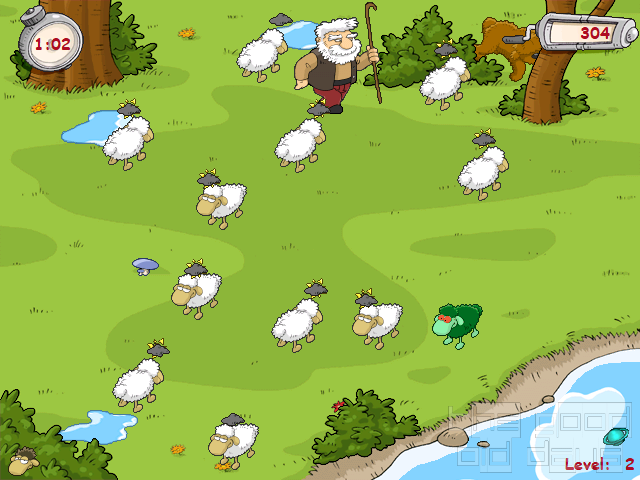 Attack of the aliens

The deeply Christian image of the shepherd and his flock is also transposed with a wink to a northern European idyll. At least the characters seem to come from there judging them by their names: Sven Bømwøllen, with a malappropriated spelling for cotton (German: Baumwolle). The shepherd Lars Einicken, with an onomatopoeic pun as his surname (Einnicken means to fall asleep in German), and his dog Wotan, whose name has a high status in Norse and continental Germanic mythology.

The freeware version tested here was offered on the servers of a leading German tabloid paper called Bild-Zeitung at the beginning of 2002 and led soon to a complete breakdown due to the rapid demand. The game was also honoured with a national Sales Award in Gold for selling more than 100,000 units within twelve months. The reason for this is probably not only the innocent and ironic approach to sexual behaviour full of hidden meanings, but also the apparently strong demand for easily accessible casual games at that time. Only the sheer number of (similar) levels in the full version deliver a real challenge to be completed with only 3 lives.

Me personally, I never took the step to the paid version, because even today I still consider the control of the sheep Sven with the arrow keys on the keyboard to be a bit awkward and somehow not “fluid”. This takes out most the fun of playing the fast-paced repetitive gameplay for me, so that the entertainment value fizzles out rather quickly. Nevertheless, Sven Bømwøllen was employed as the main character in 6 more sequels (!!), which are still being distributed commercially. 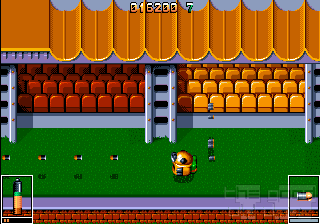