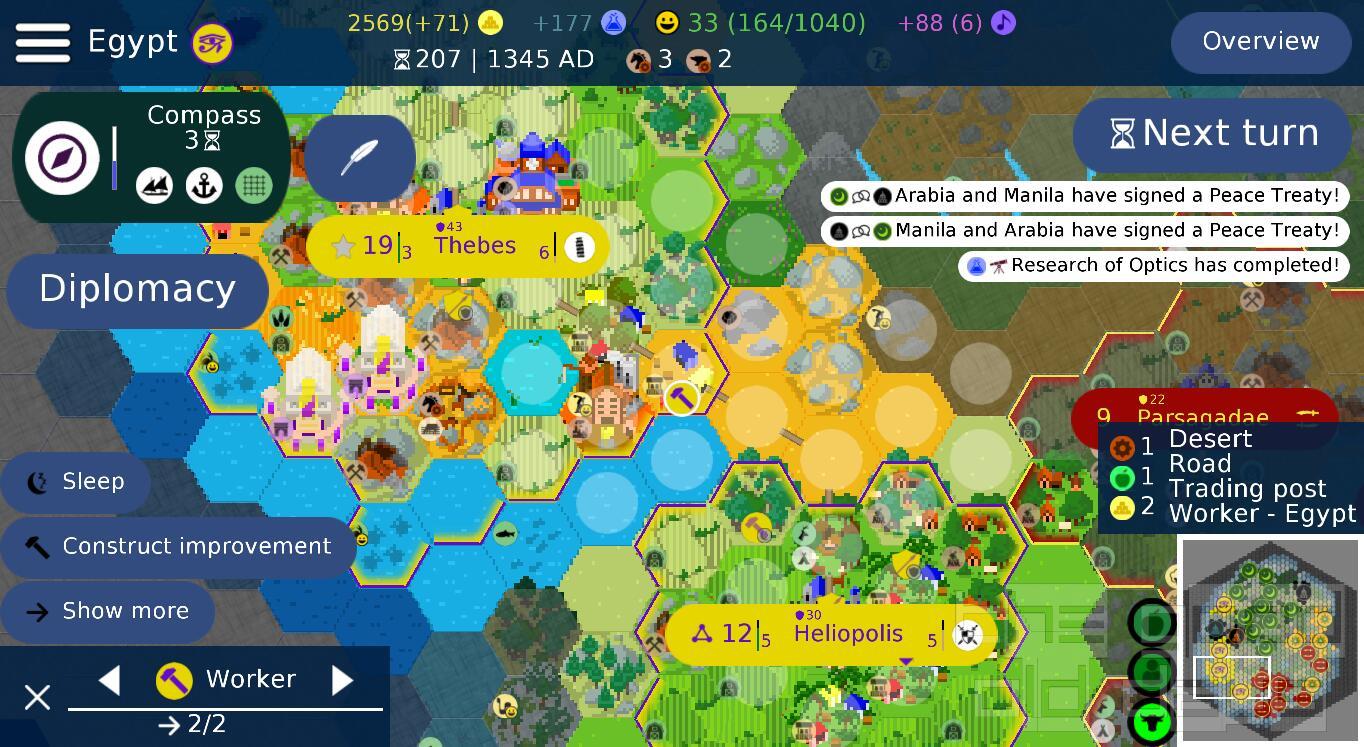 I previously wrote about my introduction into the world of Civilization. The first two sequels, parts 2 and 3 respectively, I played similarly extensively. Then came the time I didn't really follow new computer game releases anymore, but the fourth one nevertheless found its way into my home some years after release, as a friend didn't want his copy anymore. Although it visibly did some interesting things, particularly with respect to stopping the up until then usual strategy of uncontrolled initial expansion, awfully busy graphics allowing for zero overview and snail-paced turns prevented me from really getting into it. #5, I never even bothered to try for reasons explained by Linki05.

Still firing up parts 1 and 3 regularly (ironically never 2), I was content that for me, the series had run its course. Until discovering Unciv – an attempt to re-implement the rules of Civilization V with more practical visuals and, equally importantly, free. Without entering into the question of the unlikely legality of this (the developer operates under the comical assumption it's fine), please consider this as close as a take I'll ever have and give on Civilization V, and excuse any inaccuracies with respect to the original or features potentially already present in part 4.

The fact alone that you're now reading this should be enough to make one thing clear: Unciv grabbed me. The spark came easily, much of it felt immediately familiar. This is Civilization alright – the city management, the land development, the technology tree, the rudimentary diplomacy, the culturally driven influence zones, the armed conflicts.

And indeed, I found my rapid initial expansion to be punished by revised rules. Alright, a stronger focus on developing fewer cities and the land around, I'm game! Just wondering when they'll finally do away with the tedious micromanagement of city production (fun for the first few cities, grinding in the endgame), plaguing the series since day 1. This being particularly weird because in other ways, this game takes some broad steps towards taking several mechanics to be managed at global, empire level rather than simulating cities locally. 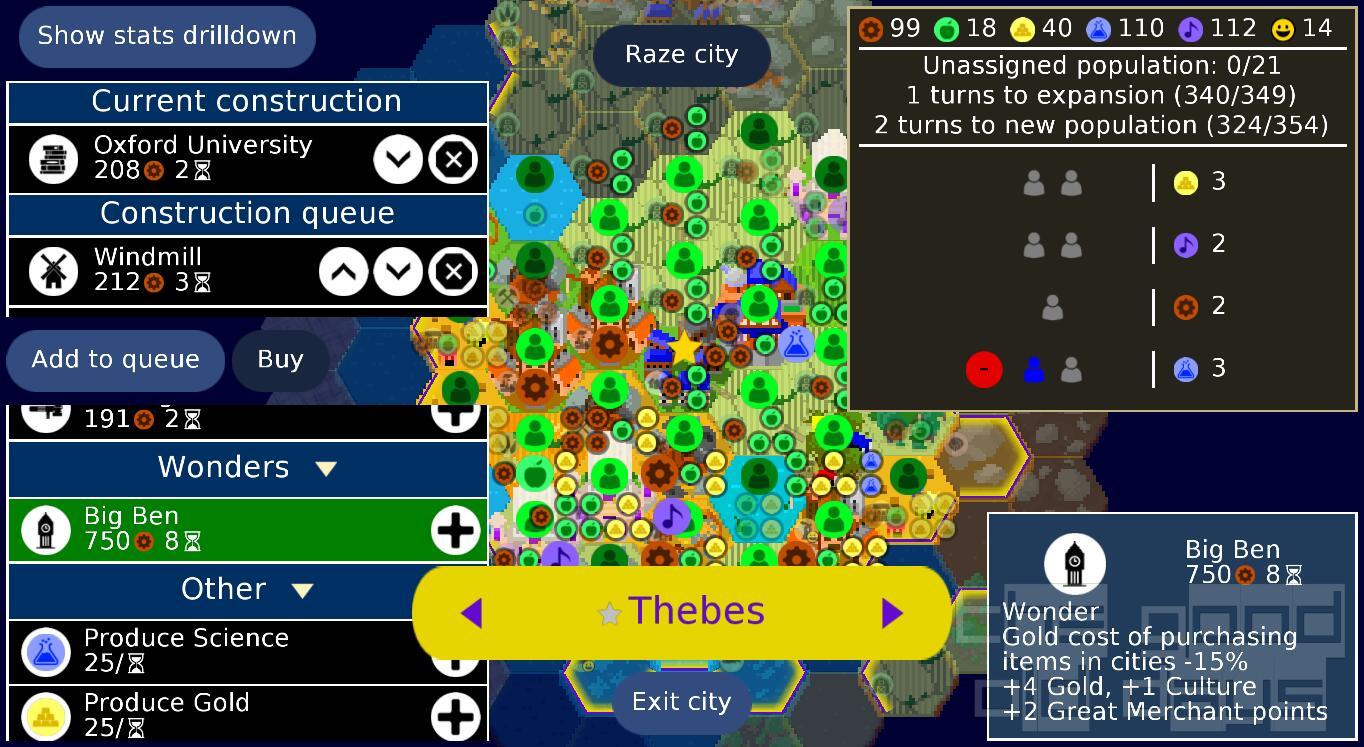 The dreaded production queue on the left

Another area where this notion of controlled growth comes into play is national wonders. These buildings' requirements and costs scale with the number of cities. Meaning small empires have a much easier time constructing them. Likewise for the society policies. These replace the one-dimensional forms of government and allow for a much more fine-grained control of how the state should function. Just that, due to the trendy “achievement” style mechanic to select them, there is never any way back after having once decided.

On economic level, the global approach is also apparent in the way natural resources are managed. Whereas in previous games, the mere existence of a transport path towards a city made them available there, they are now actually limited. Three coal mines equals three opportunities to build something special. Three within the complete empire, that is. This introduces an interesting angle of decision-making. In which cities will building a factory be most relevant?

The same resources are also needed for specific military unit establishment and upkeep. This not only makes the trade-off between, to stick with the example, a factory and a steam boat necessary, but also has impacts on warfare overall. While basic units can always be built, more specific ones become quite rare and special. Meaning it won't be possible to simply spam the world with giant death robots just because you have one source of uranium (phew…).

Speaking of military, this is actually where the game takes almost a 180° turn from the developments of the predecessor. Part 3 introduced unit stacks which became virtually undefeatable (at least by AI players). Even before, it had always been possible to move an unlimited number of units to the same map square. This game allows only one military unit to occupy the same space. Therefore, and not so much due to the switch towards hexagons, war has become much more tactical. This is further enriched by differentiation of unit abilities (many having different strengths for melee and bombardment etc.).

Though war is, unfortunately, also where some downsides show. Unciv, being primarily developed for Android-based touch devices, has a fairly intuitive interface, but using large amounts of military units turns into a chore. The absence of keyboard controls makes it apparent how much more efficient movement with the numpad was. On top, the AI – though basically competent – is not really always up to the tactical intricacies of smart spacial placement, order of attack etc.

Not pretty, but it works

Graphically, it's a somewhat weird hodgepodge of pixelled tiles and military units overlayed with vector-based control elements. It doesn't exactly look attractive, but works overall. Most importantly, the zoomable map provides a good overview and carries a lot of information – a welcome throwback to the first Civilizations which followed a similar paradigm.

Concerning state of development, Unciv is not just well playable, but already provides hours and hours of fun. Strictly speaking, it's not fully complete. At the time of writing, for example, support for religion is still considered experimental, but feels complete (weirdly reduced from its role in Civilization IV, but I have to assume it's an accurate conversion of how it works in Civilization V). Diplomacy feels a bit rudimentary, though is mostly complete according to the issue tracker. On the positive side, quite a number of community-provided modifications exist, available at the touch of a button.

So, what can I say? Unciv certainly revitalized my flame for Civilization. It has a weird appeal; every time I finish a game, I feel like now I don't need to play another time. But if I start a new game anyway, it feels fresh once again. There is something new to try out, another strategy to follow.

It seems to me this is especially because this rule adaptation is much stronger geared towards long-term planning and evolution. Starting at the medium difficulty levels, a clear and consistent game plan is really needed to win. Simply switching around strategies every couple of turns, as still quite possible in earlier games, should really only be considered in cases of emergency.

This gives quite a unique identity to this game even if many of the core themes and mechanics are obviously very similar to the predecessors. It also means it does not really replace its predecessors. It's very likely not meant to. Too many things are simplified. It will remain in my playlist as a complementary entry. Seems Civilization V is a really, really great game. Thanks to Unciv for making it accessible with no strings attached! 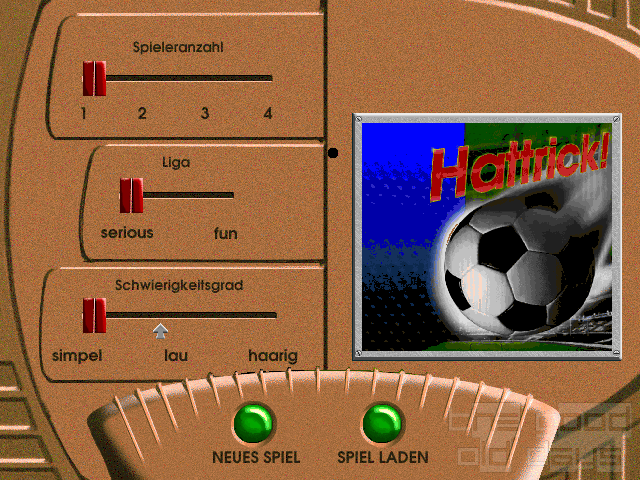