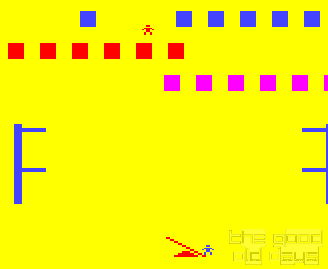 Children love to swing. The dizzy feeling is especially fun when the world starts spinning. A feeling that today's big kids also know. But with their high-tech toys in the form of virtual reality goggles, this motion sickness is perceived as rather disturbing. At least the professionals in the circus tent on their high trapeze swings may not be scared of heights in order to bring the fascination to the audience without accidents. In any case, in the perfect computer game world, the player is one hundred percent protected against a fall, without having to expose himself to the danger of the real experience itself.

In the arcades in question, the swinging- or seesawing-movement was already simulated in 1977 on an arcade cabinet that appeared with regionally different names such as Acrobat, Springboard, Seesaw Jump or Clowns. This forerunner acts as a model for later ports and gave these copy-cats the circus metaphor. A few years later, titles such as Circus Atari on the Atari 2600 and Circus, which is under examination here, reached private households. The latter one ran on the relatively unknown game console called VC 4000 from the German manufacturer Interton.

The game is based on the following principle: The player controls the back-and-forth movement of a seesaw at the bottom of the screen. Two clowns take turns catapulting themselves into the air on it. Depending on the angle of jump and the jumping power, the acrobats mostly whiz directly upwards towards the upper edge of the screen. There, balloons pass by on steady horizontal paths. The player tries to move the seesaw in such a way that he destroys as many of these balloons as possible with the jumping clowns. If a falling acrobat does not land exactly on the seesaw, the player loses one of 10 lives. In order to achieve the highest possible score, the topmost of the 3 rows of balloons should be targeted. However, this can only be reached with a lot of sway. Due to the nature of the console, there is no high score board, so a direct comparison with a second player makes perfect sense. Unlike its much better-known clone for the Atari 2600, Circus offers a 2-player mode.

The two clowns, distinct by colour, are played alternately until an unfortunate crash ends one player's hunt for points. Then the other player may try his luck. The points counted separately decide the winner and loser at the end. This archetype of hot-seat is very entertaining, as one can have a giggle over his opponent's mistakes and maybe gloat about it.

Another special feature of Circus comes from the nature of the VC 4000 console. The course of the game can be modified by (physically) pressing a button. You can play at 2 or 4 times the speed or control the appearance of the balloons: whether separate or as a continuous strip.

Graphically, the two clones are very similar. On both consoles the balloons are angular-shaped. In the case of the VC 4000, this surprises me even more because the system seems to be also capable of fine-tuned and fluent animations like the arms of the flying clowns. The sound effects of Circus are nice and crisp and in the typical arcade style.

Concerning the level of difficulty Circus Atari plays a lot easier, because the jumping area on the seesaw is much wider. Conversely in Circus it is even more difficult to hit the sweet spot by playing the accelerated versions and having to use those kind of controllers, which tend to be slightly imprecise.

It is a shame that this unique idea of playing with a seesaw was not progressed further in the game industry and only went down in games history as a curious Breakout variation.

LostInSpace:
Feel free to share anything about Circus (1978) here!
[Reply] 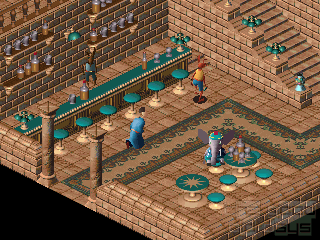