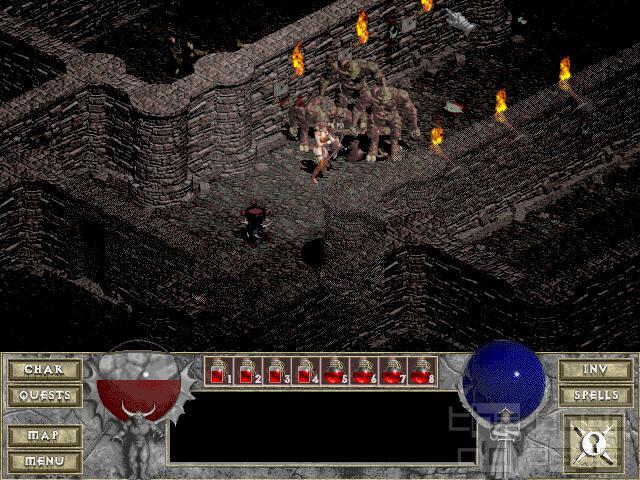 How are legends made? A good deal of it is just luck. Being out with the right product at the right time. Diablo hit the shelves at a time when the PC games market exploded and it hit a niche which was virtually uncovered. It looked and sounded great. It relied on a trusted core mechanic which had proven its addictiveness since decades. All this made it into one of the formative experiences of many gamers' lives.

Audiovisual production values certainly helped, and the game has aged rather well in this respect, too. Luckily, it arrived just before the worst early 3D experiments got out of hand. The statically isometric camera perspective makes for a decent look due to the atmospheric wall textures (the basic style changing every four levels) and decently animated sprites. Music is constrained to the village, but appropriately spooky, little sound effects blended in here and there. Voice acting is in line with the expectations of over-the-top pompousness and sound effects inside the dungeon do the rest. 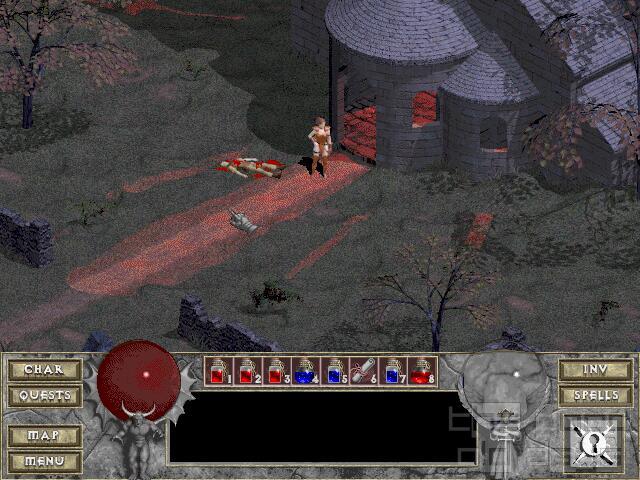 Down into the dungeon!

More importantly, though, let's talk about said core: choose one of three character classes (warrior = big sword, rogue = sharp bow, magician = loads of spells), dive into a semi-randomized dungeon and kill everything in sight. Gain experience to improve basic character stats. Most importantly, though, find new gear. First, the +1 sword, then the +2 sword and then, wow, the +4 sword further enchanted with a light source bonus. You gradually go from simple cloaks to leather armour to full body plate. Or, if you're playing magician, you find new scrolls or spellbooks increasing your arsenal equivalently.

There is just no escaping this mixture of exploration and looting. Play time easily falls into a natural rhythm which essentially allows for no stopping. Just one more dungeon level. Just gain a little more experience to increase strength. Oh, this new item is marked as enchanted, let's get it identified!

All this, of course, is exactly what's going in classics such as Moria. Even the complete game structure, up to the village right at the entrance of the dungeon, is strongly reminiscient.

Since Diablo's release, genre fans who haven't stopped paying attention to the roguelike legacy in 1983 (Moria's release) have been lamenting the loss of “everything which makes those games interesting”. It is true that Diablo makes no attempt to integrate all those more advanced features developed in later games. In this respect, Diablo cannot even compete with the likes of Angband or NetHack from the late 1980s. 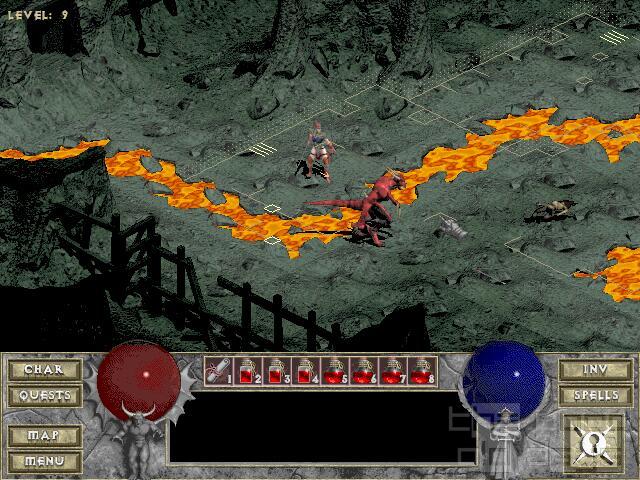 Spam the demon with arrows!

Particularly, the tactical, positional challenge of a good roguelike is indeed mostly gone. Completely obvious decisions such as shooting monsters from safe spots (e.g. through window-like openings unpassable for them) or facing a superior number of enemies at choke points (such as doorways or narrow corridors) for melee aside, there aren't many decisions to be made in battles. Instead, they are decided simply through superior strength, abundance of healing potions and a quick finger on the mouse. This even goes for boss characters, such as Diablo himself or the quest enemies. There is never any trick to beating them. The challenge is just being sufficiently tough and dealing enough damage. Appropriately, character development is one-dimensional.

Though as with all such criticism, although it is perfectly valid and correct at its core, it does miss the point. Diablo is to roguelikes what HeroQuest is to pen & paper role-playing games. It's a game made for mass appeal rather than depth. Positional tactics? This is and was never something a large amount of people want to concern themselves with. Those other people just want hear the roar of a monster, feel the adrenaline rush of it running towards them and then see the animation as their sword digs into its flesh and it falls to the ground dead. To then be rewarded with more random loot. As useless as this loot may be.

For the same reason, rogue characters never have to worry about finding ammunition, let alone handling different types of it. Even when it comes to equipment, there are hardly ever real choices to be made. In 99% of all cases, the selection of which weapon etc. to equip is obvious, as the rule of more complex games to always give particularly good items also at least one significant downside has not been applied here.

Yes, it's all shallow, but it's also extraordinarily relaxing to shut down one's mind and get into this flow. Diablo is a game for those people who eat popcorn in the cinema. The true film aficionados may scoff at the rustling of the bag and the crunching, but this is true mass appeal. 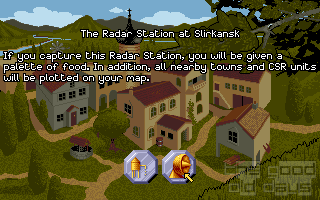