Ninja Carnage is a quaint little game. Concerned with a ninja's infiltration of a fortress in order to kill off a demonic young woman, it boasts “29 levels”, “10000 words” and “128 different deaths”. A high number of deaths being a quality indicator? It made sense once I understood what it was doing.

Mind you, it makes no attempt to imitate Last Ninja in any respect. Rather, talking about “levels”, what it means is a small picture on the screen with 3-9 hotspots which have to be clicked in the right order. Each screen has a little challenge to the protagonist. Get across a trapped area. Disarm a bomb. Fight an enemy. Actions triggered by the hotspots may differ wildly. Depending on plot necessity, the right (or wrong) one is selected automatically by the game. 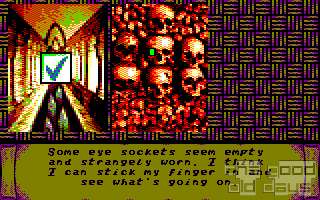 Good luck picking the right one

The key gameplay mechanic is therefore performing an exhaustive search of each screen and brute forcing the “solution”, i.e. the right order of actions, through trial & error. That is because there is really no way to tell upfront what may be the right course of action. With one or two exceptions maybe.

Doesn't sound too interesting, does it? It's not too bad, because at least all other choices will result in instant death. Which, coming back to the beginning, is indeed a blessing. Instant death implying that search space is strictly limited, and the textual descriptions of those death scenes being one of the main selling points of the game (more on that later).

Moving away from preventing negatives, it is admittedly impressive what the game gets out of such a limited core mechanic. Controls are occasionally reversed. The cursor may tremble a bit. Sometimes, a timer is running down, requiring quick reaction. Or the game will display a sequence of directions which the player has to reproduce. None of it really groundbreaking, but an honest attempt at keeping things a little varied is there. 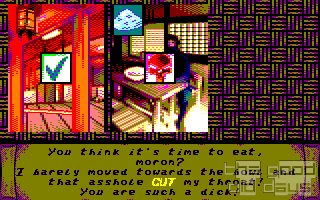 Though then, as hinted at, gameplay is really not the main selling point. Neither are the graphics, constructed from digitized graphics seamlessly completemented by pixel art, which often looks quite impressive, but occasionally just turns into an unrecognizable mash.

Rather, it is really a highly text-based game. Ninja Carnage does something interesting with respect to the duality of protagonist and player. Although the player effectively controls his actions, the protagonist addresses the player directly in-game – in very specific ways. Particularly, the tone is one of loathing is contempt. Questioning the player's competences in the nicest moments, outright insulting them in many others. This, indeed makes the death scenes, vividly described, a main point of entertainment.

This is because this is the author's attempt at humour. Overall appreciation of Ninja Carnage, above all, depends on whether this works for you. The “29 levels” being easily solveable within an hour maximum, it could be worth giving it a try at least. After all, there is little to lose. 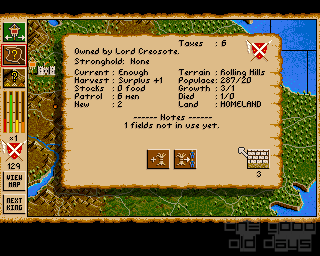