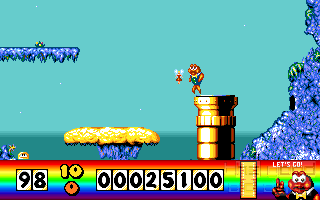 One side's heroic agent is the other side's terrorist. From the point of view of the human world, James Pond clearly falls into the latter category. His acts of sabotage clearly falling into the realm of eco terrorism. Yet, wasn't it us humans who started the pollution of the underwater world first? Shouldn't this fish on a mission be allowed to fight back? 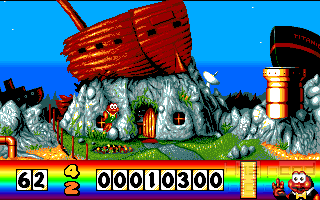 Taking place almost exclusively under water, James Pond sets itself apart from the bulk of jump'n'run games very effectively, even if a number of mechanics are actually quite similar. Although jumping is only possible on the brief surface visits, avoiding strolling enemies, collecting items and disabling opponents with (air bubble) shots are all present as expected.

Where the game scores is having unique objectives per level. There is always a specific environmental hazard to be fixed. A leaky oil pipeline, nuclear waste… at the very least, a group of lost fish has to be guided to safety. Level layout is comparatively complex, with hidden passages to initially invisible areas. Objects can be found, picked up and used, introducing small puzzle elements. Neither graphics, nor sound are any cause for complaint. The player avatar is very recognizable, backgrounds are varied, enemies are thematically appropriate and have imaginative behaviour patterns. 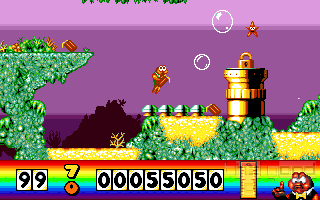 All this makes it easy to see how good the game must have looked on paper. Implementation makes it a problematic playing experience, unfortunately. Associated with the underwater theme, Pond can be freely moved in all directions, but he's subject to inertia. Even if not strongly pronounced, it does make avoiding enemies or other obstacles close to impossible quite regularly. Although James has several lives, one of which is only lost upon depleting an energy bar, both go down fast, the bar not lasting much beyond a single encounter with yet another creature which shot into view out of nowhere.

The game nicely enough lets the player get used to the slightly unusual setting in the first two or three levels. After that, difficulty steeply increases, and as pointed out not always in fair ways. It is somewhat ironic that a game with such a cutesy surface, which outwardly appears to be aimed at smaller children, can be this devilish! 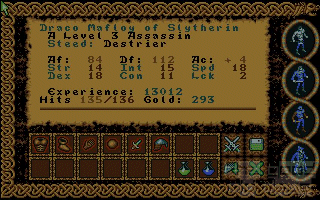