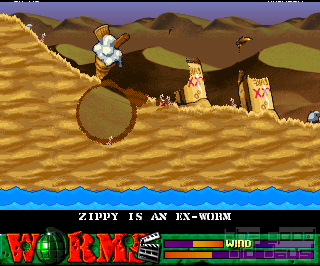 Worms had been the last big moment coming from the generation of bedroom programmers. Andy Davidson created the pinnacle of the artillery genre which had been considered dead as a doornail by the 1990s, and as a final goodbye to the original Amiga platform, he tweaked it into what easily is the ultimate version of his creation.

What makes Worms so much fun? The mathematical foundation of entering angle and velocity of a shot replaced by less exact, but more intuitive visual means may have been a good start. Though it was of course the injection of the cute and crazy animals with their insane weaponry which finally made this variant so appealing. After all, shooting regular shells from a regular barrel can quickly turn into a dry affair. Sending an exploding sheep over, on the other hand…

Apart from the choice of weapons, Worms also featured teams of four pitted against each other, the ability to move the team members around, several ways to dig through the terrain… the rather scientific challenge of more traditional artillery games watered down, but made into accessible, anarchic fun. Especially in multiplayer, the amount of schadenfreude when triggering a domino effect and having a land mine fall down on an enemy worm, it sliding into lava or any similar thing is just endless. 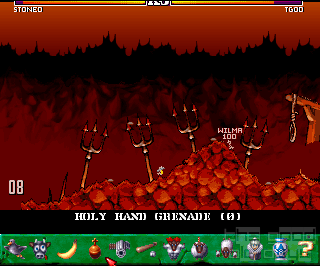 “Three shall be the number thou shalt count”

That said, not all was simply dumbed down. The introduction of different weapons may have removed some of the elegant simplicity, but it also opened up new tactical options. Compared to the standard bazooka, grenades won't explode instantly upon hitting obstacles, but rather go off by timer. Airstrikes will hit remote areas. The shotgun can be fired twice per turn. A feature which can be misused to fire a shot and then move back into safety. And of course, there is nothing more humiliating than being eliminated by a simple push.

As far as the Director's Cut is concerned, this is exactly where it extends things. With the newly introduced superhero sheep, the priceless ming vase, the old woman and the holy hand grenade, the bizarre side of things is further pronounced. Unfortunately, none of them brings any real added value to the game, as they are all slight variations of what was already there.

The introduction of cavern levels, on the other hand, does spice things up a bit. A roof preventing weapons from flying high, tactics definitely have to be adapted in such surroundings. Terrain destruction now leaves a newly introduced background layer intact, but this is unfortunately just a purely graphical effect. The game's physics remain as bizarre as ever, with large objects simply floating in the air even if the ground below has been completely destroyed. 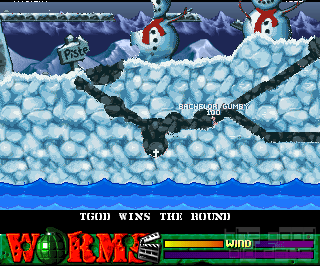 Another victory for the home team

Though the latter also makes part of Worms' charme, doesn't it? Sure, the levels have some nicely drawn objects on top of the landscape, but they are not objects in the real sense. They are just pixels, part of the terrain. Not only do they do nothing, they also behave just like a random bunch of pixels which just happen to look like something a player would interpret as something. Terrain destruction is based on pixels, nothing else. It's crude, but it works in the context.

A very simple level editor working like a paint programme (“graffiti mode”) and loads of customization options (disallowing certain weapon types, setting timers…) as well as game modes (tournaments, leagues…) should enable each and every player to set everything up exactly as they want it. Did this make Worms: The Director's Cut a game worth purchasing back then? Most certainly it offered little value for its money for owners of the original Worms back in the day.

Though then, when Worms 2 came out shortly thereafter on that other system, disregarding its graphical facelift, it was really almost the same of what Davidson's parting gift to the Amiga community had already offered. This, in the end, speaks volumes about the strength of the original design. Why fix something which wasn't broken? Didn't virtually unchanged sequels keep Team 17 afloat for years, decades to come? The Director's Cut is a great legacy, even if it sold only five copies. 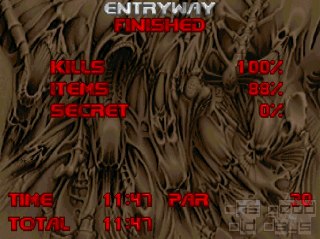