The Sentinel
for C64 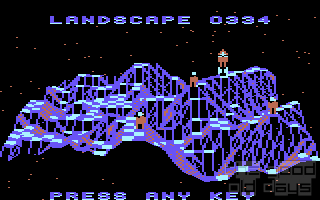 Within the 20 years he was active, an eternity in the computer gaming industry, Geoff Crammond managed to keep a spotless record of having only made or been involved in hits. Nevertheless, there is one game in his oeuvre which sticks out. Of course, these days, he is best remembered for his racing simulations (Stunt Car Racer, Formula One Grand Prix). His early work, The Sentinel, is much less grounded in our reality.

Originally developed on the British-only BBC Micro, Crammond ported his game to the internationally much more popular C64 soon after. The premise is highly abstract. There is a near infinite number of procedurally generated worlds (10000 exactly). Each is ruled by a Sentinel, a robotic-looking being towering on the landscape's highest peak. It is the player's task to overthrow this being by absorbing its energy and taking its place. Just because. 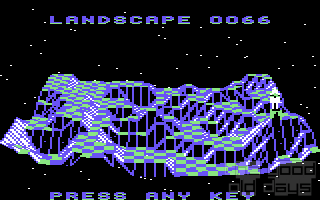 It's not that there is really anything tangible to be gained on those worlds. The landscapes are based of a chessboard pattern with each field having its own height level. They are represented using vector graphics. Memory efficient, as absolutely required to pull this off at the time. The only objects around are trees… and the Sentinel, plus his guardian underlings.

Now, given that it is all shown in first person perspective and the action taking place in real time, you could almost take it for an early 3D shooter as they became popular in the mid 1990s. The twist, however, is, that the player cannot move her robot. Instead, it's all about energy. Absorbing trees or other beings stores energy. Energy can then be used to create new robot shells to jump into or even new trees or rocks.

Jumping from shell to shell is therefore the only way to slowly creep closer to the Sentinel. The enemies have to follow another core rule, just as the player: absorbing only works if you can see the ground square something is standing on. Just spotting the top of a tree is not enough. Hence, building rock piles to rise up slowly, but carefully, will be key. 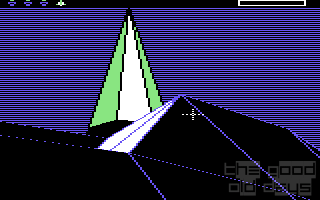 While this rule may irritate new players, it is actually exactly what enables the whole game to work. The Sentinel, standing at the highest point of each level, could spot and therefore absorb the player avatar easily if purely spotting a part of it would be enough. Though as it is, the player has to find a path through each level which, even when spotted, remains protected from the deadly gaze. Either moving about at angles which prevent being caught or putting obstacles into the line of sight.

This, plus the equilibrium of energy consumption and absorption, requires careful planning. Thankfully, the second law of thermodynamics has not been followed here; the overall level of energy present throughout the world remains static. If in doubt, it is often possible to retrace steps when necessary, for example after running into an unexpected dead end. Only the Sentinel itself is able to effectively remove energy from the world forever, by draining the player's reserves.

Constrasted with the need for thinking and planning, everything taking place in real time and, even more nerve-wrackingly, in first person perspective, The Sentinel appropriately built an amazingly intense atmosphere of oppression and paranoia. Will the Sentinel or one of its guardians turn and notice me? Maybe they're already right behind me, although I haven't even noticed them? When indeed spotted, but not yet absorbed, an energy meter will start flashing. The grating sound coming from the SID chip in those moments, emerging from the total silence usually prevalent, easily caused panic for the players already on the edge. 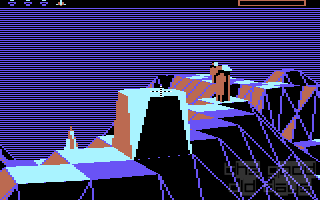 From today's point of view, the three-dimensional vector landscapes look very barren, of course. Just their colour scheme changes from time to time. Jagged geometric shapes make for a harsh, hostile look. The C64 was not a machine made for this sort of thing, having been built for pixel sprites instead. Consequently, things move slowly. One rather has to wonder what pre-loading tricks Crammond applied to make the performance semi-bearable at all. In a way, this could even be seen to increase the unnerving atmosphere. Come on, turn! Impatient types may want to check out one of the numerous semi-modern-day remakes.

Original or remake, technology pros or cons forgotten, the highly abstract theoretical challenge of moving around these abstract landscapes, almost devoid of life, is filled with an implicit claustrophobic meaning. Each level ends with either the player or the Sentinel being absorbed. Once the archenemy has been disposed of, the player will also move on to the next world. After all, once the task has been fulfilled, there is nothing further to be done, this world has lost its function. Only in the sneaky confrontation, in the power game, lies the reason for those beings to exist. That's certainly a philosophical touch right there. The Sentinel remains a masterpiece due to its flawless design.

Mr Creosote:
Let us know how this remake plays!
beranmuden:

Great review, I remember my brother being obsessed witht this game.
Maybe I should give it a go as well. Apparantly there's also a freeware remake called "Zenith" available...

Mr Creosote:
Feel free to share anything about The Sentinel here!
[Reply] 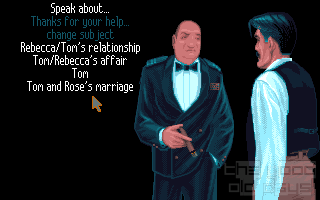