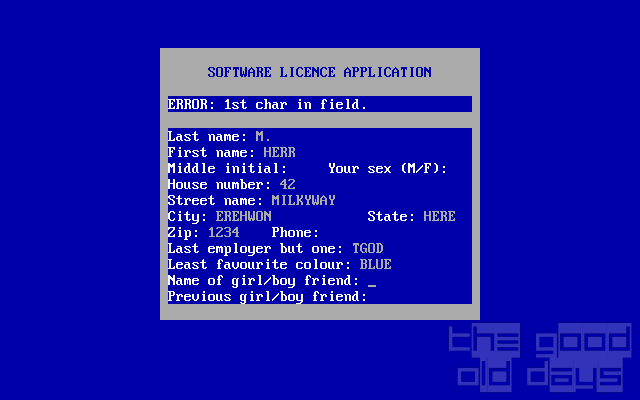 Unlike most computer game conversions of well-known novels, The Hitchhiker's Guide To The Galaxy had actually been made in close collaboration with the original author, Douglas Adams. The game sold well, so a sequel would have been the logical choice – and surprise, Adams had apparently enjoyed the experience and wanted to jump into the next collaborative project with Infocom. Though instead of The Restaurant at the End of the Universe (which ended in development hell and finally died with Infocom), his mind was set on an original creation.

His satire on every day Bureaucracy did make it to release, though the way there can also hardly be described as smooth. Adams, being his notoriously fickle self, faded out of the project after few months. Designers came and went. Michael Bywater was brought in a sort of Douglas Adams imitator to finish the writing. The game was finally released in 1987, two years behind schedule. Steve Meretzky referred to it as a “Chinese Water Torture project” in retrospect, giving us outsiders just a light taste of what had happened during all this time.

The game's troublesome birth certainly explains a couple of… irritations which even an unsuspecting player may notice. Specifically, it feels random and disjointed. There is no coherent plot to speak of. The Adams/Bywater humour, in the best scenes, could be considered laugh-out-loud funny if I were a guy ever laughing out loud while playing a computer game, but really, it's all just little more or less unlinked vignettes.

A collection of good scenes could still shine overall, of course, and it does. The humour works on various levels. First and foremost, there are some nicely interwoven micro designs between the game's theme (bureaucracy) and challenging puzzles. The famous bank puzzle in which the player has to misuse all too complex forms in a way to finally receive some money from his account being a prime example.

Second, there is some emulation of real life annoyance, such as the game's opening requiring the player to fill out a long-ish pseudo registration form and quizzing him or her about those answers later or the lengthy process of ordering a simple meal at a fast food restaurant which consists of all too many hardly relevant choices and needs to be redone a second time. A risky design if there ever was one, as it is running the risk of actually annoying the player. Regardless of personal perception, one has to admire the meta humour here.

Concerning gameplay, this goes along with the fairly unique mechanic of monitoring the protagonist's blood pressure. Specific events have it shoot up. Too far, game over. Though this mechanic also relates to some of the weaker scenes, which can at best be described as trite clichés, such as the crying baby. On top, it punishes player experimentation, as failed actions also increase blood pressure – bad design in this respect. Particularly since it is coupled with some really tough puzzles which really require a lot of trying.

Further on questionable choices of overall design and thematic consistency, there are the characters. A number of them is delightfully weird, such as the paranoiac or the hacker. Seen by themselves, there would be nothing to complain about. Though what's the thematic link with bureaucracy? How does bureaucracy relate to conspiracy? Why the sudden even further drift towards towards the action adventure genre when the protagonist jumps out of a plane and explores and underground complex?

None of these parts are immanently bad or flawed in major ways. Some game mechanics towards the end, such as the simulation of computer usage, actually shine. It's just that at this point, the sum of all these parts does not come together anymore at all. One has to wonder how we got here from the starting point of the protagonist being stressed about things not working in relation to him moving houses.

In spite of these obvious shortcomings, Bureaucracy is a game to be remembered. It's quite excellent first half, even if already disjointed, easily surpasses the bulk of contemporary adventure games by itself. It's not Infocom at its best, but one of their most memorable – even if part of it has to be attributed to the meta level.

Infocom's text adventures are known to be the best. Their game engine with its great parser was used for a large variety of masterpieces. Bureaucracy is one of those. What it makes superior to most of its “colleagues” is the hilarious plot. It was written by Steve Meretzky (Leather Goddesses of Phobos, Stationfall) and the well known author Douglas Adams. The two had collaborated before to convert Adams' The Hitchhiker's Guide to Galaxy into a game.
You have just moved into your new house. Your new employer (the “Happitec Corporation”) wants to send you on a holiday to Paris. Unfortunately, the spending money they promised you hasn't arrived yet. And your credit card has been invalidated by your bank. So you just wander around to find a way out of this mess.