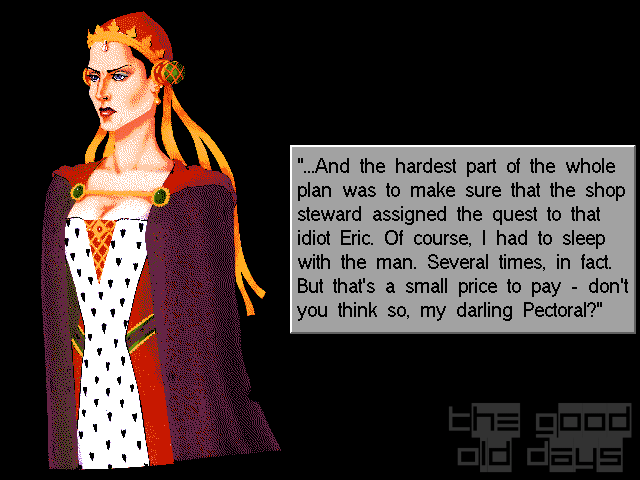 Infocom went out with the 1980s, but their one semi-external contractor (having just entered the business towards the end of the former industry leader) just didn't want to give up. Bob Bates founded Legend Entertainment, planning to continue the legacy of the company which had just folded. His first two games could be seen as test balloons to check out the remaining market opportunities. Where Timequest aimed itself at the expert market, those die-hard players who still wanted to dive deeply into expansive worlds and solve intricate puzzles, Eric the Unready took a much lighter approach, both in tone and gameplay.

Eric isn't ready. Among the knights of the court, he's the least respected and trusted one. This makes him the perfect candidate when the scheming evil queen has her stepdaughter kidnapped and has to send someone pro forma to her rescue. Oblivious to the real dangers he may face, he's stumbling into a grand fairytale adventure under the direction of the player.

Bates takes a scattershot approach at humour. The ratio of jokes per minute is almost unheard of, hoping that something will stick and cause some laughs. As with all things humorous, some parts work better, some don't. Particularly, the countless pop culture references may not have aged perfectly, though at least most of them refer to still quite well known phenomena – nothing dates such jokes more than relying on familiarity with subjects everybody has forgotten about. Some were (and are) even subject to cultural barriers (e.g. the pile of bones among the Star Trek crew). 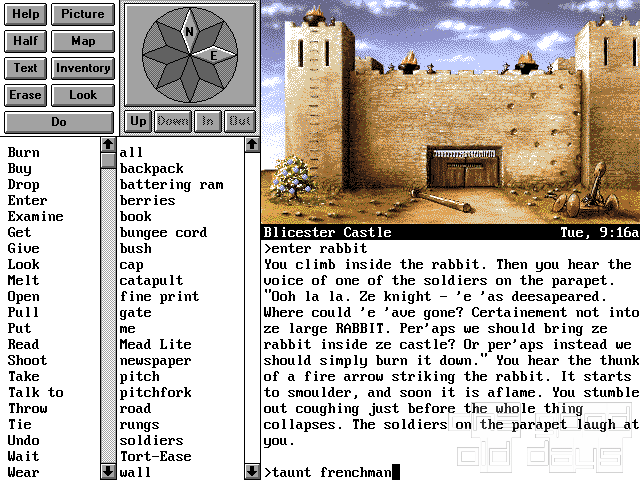 As Pansy said, it's only a model

Though then, there is lots of slapstick, wordplay, puns and simply zaniness which can be considered mostly timeless. Maybe most importantly, this is the game on which Bates first broadly applied his stated paradigm to entertain the player even when stuck or straying from the solution path. This may be worth some elaboration, although not 100% specific to this game.

You see, in old times, most adventure games were implemented just in the way of allowing the commands which were necessary to finish the game successfully. Everything else, or at least most other things, were simply rejected by the text parser. Bates (and some other good designers before him) recognized that players spend most of their time somewhere else mentally, trying to find the right solutions. This play time shouldn't be just frustration or boredom, but contribute to the entertainment.

Eric the Unready takes this to an extreme. It doesn't just provide answers to serious attempts to progress on player side, but makes an attempt to cover virtually anything which can be expressed, no matter how silly. This way, the player can play along with the general tone the game sets and she's often rewarded for doing so. Ever tried eating muck? 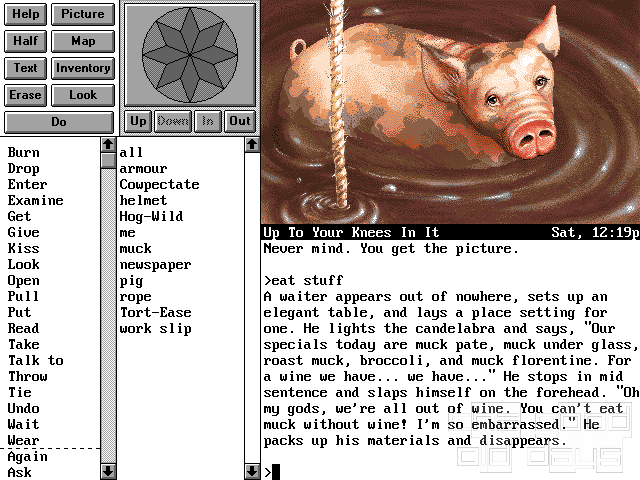 If only I had brought wine!

On the actual puzzle side, the game is rather light-weight as well. Within the frame of a silly world, solutions are rather straightforward. What makes them even more solvable is the game structure. There is hardly ever more than one task at hand or more than a couple of locations accessible. This strict linearity does wonders for progress (polar opposite of Timequest).

For sure, out of the two, this is the game which proved to have the significantly broader appeal. Instant accessibility coupled with humour is a formula which never gets old and it certainly was on an all-time popularity high after Monkey Island (which this game even quotes in obvious admiration). Execution has held up quite well to this day even. It may not have drawn the masses with its text interface (the point & click part and exposure of the verbs and nouns in lists admittedly never worked that well), but the nice illustrations were a good concession towards changing times at least. 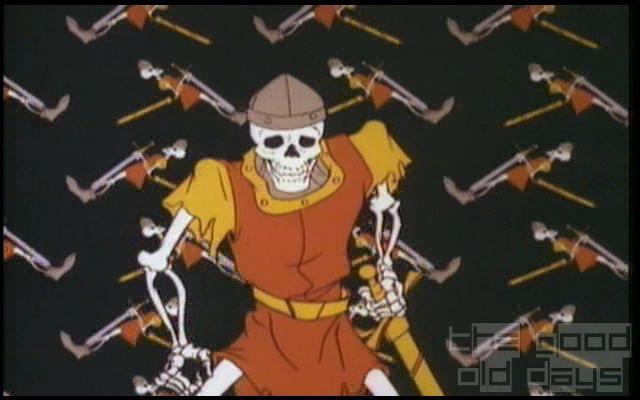